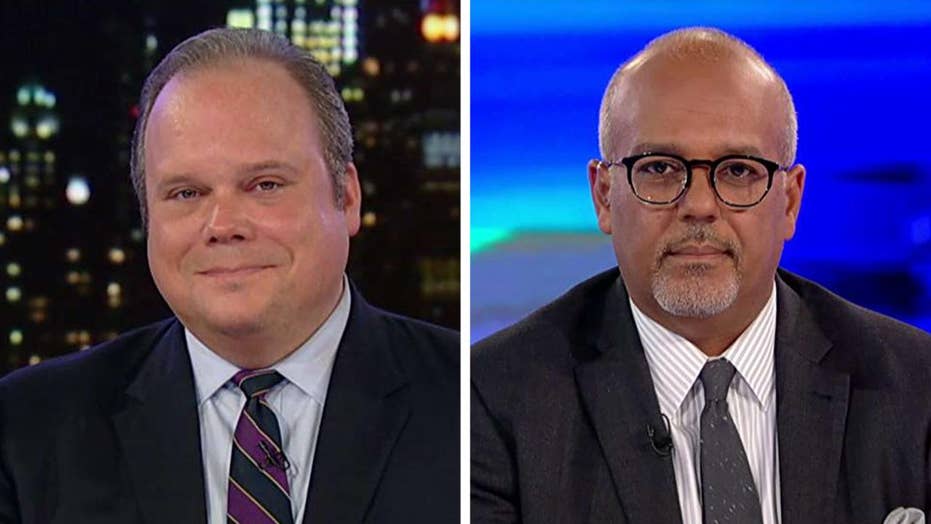 Trump weighs in on Clinton-Gabbard feud

President Trump says that Hillary Clinton labels anyone that opposes her as a Russian agent; reaction and analysis from the 'Special Report' All-Stars.

The New York Times was widely criticized on Monday for what was described as a "puff piece" about Hillary Clinton over her recent attacks on Rep. Tulsi Gabbard and President Trump, suggesting she's a "master troll."

In an analysis piece from Times reporter Lisa Lerer, she questioned whether Clinton was "trolling us," listing her "corrupt human tornado" insult towards Trump, her unsubstantiated suggestion that the Russians were "grooming" Gabbard, D-Hawaii, as a Russian asset in 2020, and sharing a fake letter mocking Trump's recent, casually worded missive to Turkish President Recep Tayyip Erdoğan, which neither she nor Lerer credited "Jimmy Kimmel Live" for creating.

"Welcome to Hillary Unplugged," Lerer wrote. "For most of her public career, Mrs. Clinton has been constrained by the expectations of her position, be it first lady, senator or secretary of state. Now, after her stunning loss in 2016, it seems she finally feels liberated to speak her mind."

It continued, "And she’s certainly stirring up a lot of drama while doing it. The two-time Democratic presidential candidate continues to loom large in the psyche of her party — both as heroine and villain."

Much of the piece was dedicated to Democrats supposedly welcoming Clinton back into the spotlight and fueling speculation as to whether she will launch a third run for the presidency.

However, the Times piece was met with a slew of mockery on social media.

"She makes a no-evidence charge of treachery against Tulsi Gabbard and gets a puff piece from the New York Times," Fox News senior political analyst Brit Hume reacted.

Clinton has been making headlines in recent weeks while promoting her new book she wrote with her daughter, Chelsea. However, she was blasted by both the right and the left for spreading a claim about Gabbard being influenced by the Russians without evidence during an interview last week.

"I'm not making any predictions, but I think they've got their eye on somebody who is currently in the Democratic primary and are grooming her to be the third-party candidate," Clinton said, in an apparent reference to Gabbard. "She's the favorite of the Russians. They have a bunch of sites and bots and other ways of supporting her so far."

She then accused former Green Party presidential candidate Jill Stein, who ran against Trump and her in 2016, of also being an asset of Russia: "That’s assuming Jill Stein will give it up, which she might not because she’s also a Russian asset. I mean -- totally." Stein also denied Clinton's claims.