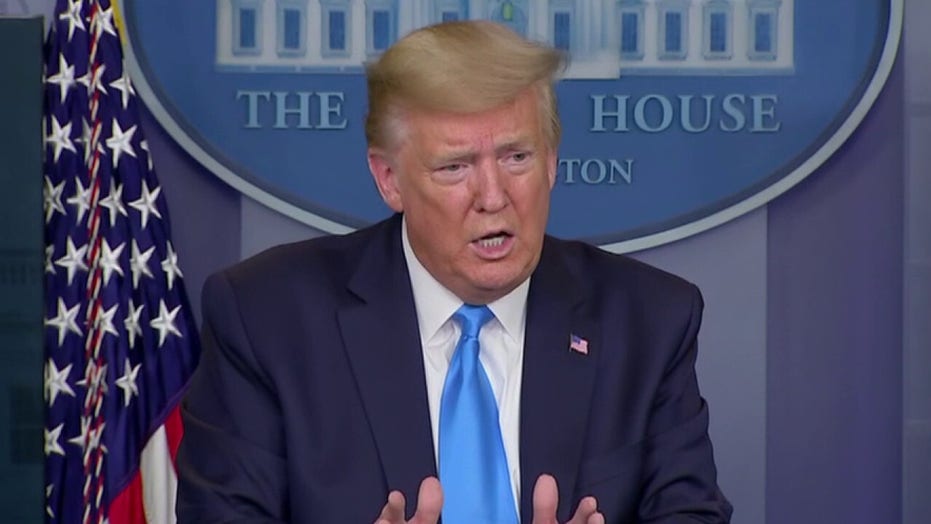 President Trump and his coronavirus team have been taking the stage in the White House briefing room on a close-to-daily basis for weeks now, often answering reporters' questions for up to two hours per evening. The briefings have even become a dinnertime tradition for many Americans, but they are ruining the appetites for many in the mainstream media.

“If the cameras were taken away, perhaps Mr. Trump would worry less about putting on a show,” Cottle wrote. “In using his platform to mislead the public, the president is not serving any interest but his own. In facilitating this farce, neither is the media.”

But Fourth Watch editor Steve Krakauer told Fox News that journalists who complain about the briefings are essentially admitting defeat because “media should welcome these opportunities” to ask tough questions of the administration.

“Instead, most of the media gets so personally invested in petty feuds that don't serve the American public. Great journalists should relish every moment to question the leader of the free world, poor journalists want to shield the public from their incompetence,” Krakauer said. “This crisis isn't going away. I hope the media gets serious and focuses on substance over style, and does their job to inform the American public.”

Prior to the coronavirus pandemic, the Trump administration has essentially halted the tradition of formal press briefings as Trump opted to instead speak to the American people on Twitter and answer questions from reporters as he boarded the noisy Marine One. The mainstream media regularly slammed his lack of official briefings, and on Tuesday Trump mentioned as much.

Last month, New York Times media reporter Michael Grynbaum wrote a piece questioning whether or not networks should air the briefings live. Around the same time, several far-left critics of Trump condemned the briefings. “I would stop putting those briefings on live TV. Not out of spite but because it's misinformation,” MSNBC’s Rachel Maddow told viewers.

A handful of conservative media critics told Fox News then that these opinions were likely more self-serving: Trump performed well during the briefings, and therefore, his critics didn’t want him to have the exposure. But as the calendar has flipped to April and coronavirus continues to impact the lives of every American, more and more voices have attacked the briefings.

“The View” co-host Joy Behar urged ABC News' Jon Karl to walk out of briefings and call him a liar, MSNBC’s Joe Scarborough questioned why his network bothers to air them and CNN hosts Anderson Cooper and Don Lemon have both condemned the briefings. Many critics compare the briefings to campaign rallies, making the case that Trump is simply interested in drumming up attention and attracting eyeballs.

Liberal CNN has even stirred up attention for itself by cutting in and out of briefings, seemingly to make a point that some of Trump’s comments aren’t newsworthy. The decision not to carry the entire event on a nightly basis has polarized the media industry.

“The briefings absolutely should be aired in full and the comparison to campaign rallies is willfully dishonest and an insult to the reporters in the room,” The Hill media reporter Joe Concha told Fox News. “Campaign rallies don't have the press corps asking questions for sometimes more than an hour. Rallies don't have Dr. Fauci, Dr. Birx, Surgeon General Adams and other members of the task force team like Vice President Pence providing critical information.”

White House correspondent-turned Spectator USA Washington editor Amber Athey told Fox News that it’s “ironic to see the same media who took at face value that China had no new coronavirus deaths refuse to allow their viewers to watch the president address the nation during a global pandemic because of concerns about ‘disinformation,’” referring to recent mainstream media outlets – such as NBC News -- that have been accused of publishing China talking points.

“We should be setting aside partisan bickering right now to come together as a nation but too many in the establishment media just can’t resist the urge to score points against Trump,” Athey said.

“They are boosting Trump’s popularity and he fights back against media bias,” Gainor said. “What’s especially amazing is the news media’s hypocrisy. They love it when Gov. Andrew Cuomo holds a press conference, because they support him. They hate it when Trump holds one because they wildly oppose him.”

Gainor feels traditional journalism has “thrown out any sense of ethical guidelines and does whatever it can to hurt Trump,” with the talking point du jour being a call to silence the briefings.

Trump has been accused of everything from “hijacking” the task force for personal gain to simply repeating the same talking points on a near-daily basis.

Cornell Law School professor and media critic William A. Jacobson told Fox News that “Trump's daily briefings present a dilemma for CNN and MSNBC because there is huge viewer interest, which normally a news network would want,” but the format limits their “ability to negatively spin against Trump” in real time.

“So far, viewer interest seems to be prevailing, and both anti-Trump networks show most of the briefings, though CNN in particular cuts in and out to provide negative commentary,” Jacobson said.

Status Coup founder and journalist Jordan Chariton used to cover the media industry but now focuses on progressive causes and is critical of President Trump. He panned the briefings, telling Fox News that “journalistic outlets have a responsibility to minimize the spread of disinformation” and thinks the only real value comes when Dr. Fauci and Dr. Burke are at the podium.

“Regardless of this, he is the president -- networks should take the beginning of his briefings -- but I don’t take issue with them cutting away early,” Chariton said.

Most opinions about the coronavirus task force briefings coincide with party affiliation, as many liberals oppose them and the majority of conservatives want to hear from the president. Some watchdogs see both sides of the argument.

DePauw University professor and media critic Jeffrey McCall – who typically condemns the perceived liberal bias of the press -- told Fox News that the briefings are “definitely newsworthy” but have their share of critique-worthy issues and thinks shorter events would be more beneficial to Americans.

“The key officials leading the nation's COVID-19 response are right there each day with important updates the public needs to hear. If these daily briefings weren't happening, the press would be outraged about lack of transparency and cover-up,” McCall said. “These pressers, however, are way too long and that extended duration dilutes the valuable information that is provided.”

McCall feels that “part of the blame for the unnecessary duration is that Trump speaks too long and tries to weigh in on every aspect,” but reporters also drag them out with “too many long-winded questions that are actually more like commentaries.”

Like Chariton, McCall also feels that the majority of the news is generated before the Q&A, when experts are providing updates.

“Little actual news of substance is being generated from the journalists' questions, which rehash old material, pick fights, or try to force unhelpful and impossible speculation,” McCall said. “These pressers need to be information events as much as possible, and not promote theatrics or rhetorical jousting. Trump, by his nature, brings drama to every circumstance, but the press is also diminishing the information nature of these briefings with endless, unhelpful questions and combativeness.”

The briefings have been routinely lasting for roughly two hours apiece, which McCall feels is a waste of valuable time for experts involved when they’re busy trying to solve the coronavirus crisis.

“Everybody involved should make a commitment to make these briefings shorter. Get the experts up there to provide key updates, allow some relevant and targeted questions from the press, and then let everybody get back to the real work of solving this crisis,” he said. “If the briefings were limited to 30 minutes, it would make the decision to carry them live on cable and broadcast outlets easier and more citizens would actually want to suffer them.”

The media-industry split when it comes to the White House briefings could have a new key player soon, as Kayleigh McEnany was named the new press secretary on Tuesday. Her predecessor, Stephanie Grisham, never held an on-camera briefing and it remains to be seen whether or not McEnany will get behind the James S. Brady Press Briefing Room podium anytime soon.