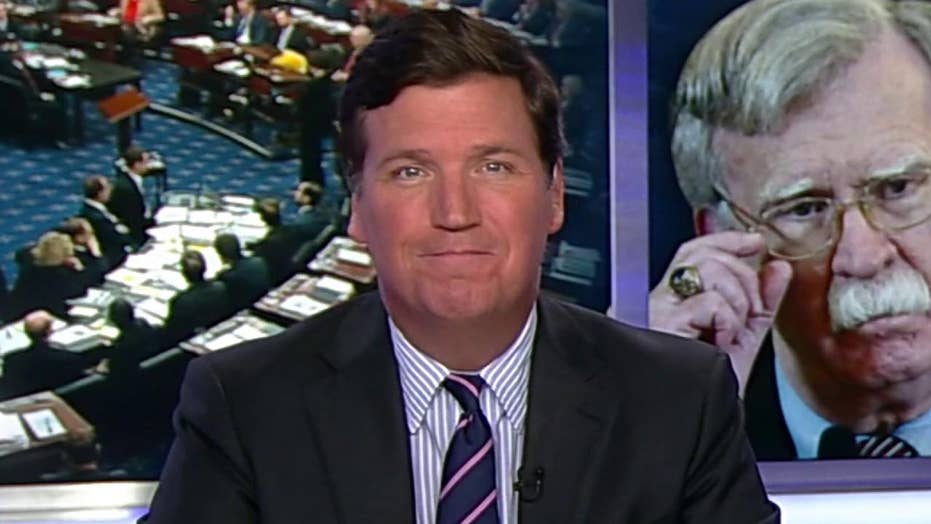 Tucker: John Bolton has always been a snake

Tucker Carlson is a longtime critic of former National Security Adviser John Bolton, who Carlson believes has a dangerous disposition toward war. So it was no surprise Monday when the host of "Tucker Carlson Tonight" blasted Bolton, comparing him to a snake in response to a New York Times report that Bolton's forthcoming book alleges President Trump tied Ukraine aid to an investigation into former Vice President Joe Biden's son Hunter.

"Donald Trump used to recite a poem about a woman who took a dying snake into her house and nursed it back to health. The snake did become healthy and then immediately whipped around and bit the woman." Carlson said Monday. "As she breathed her last breaths, the woman asked the snake, 'Why did you do this?' 'Well, because I'm a snake' was the reply. 'That's what we do.'"

Carlson responded to those who questioned why Bolton joined the Trump administration in the first place if he disliked the president so much.

"Bolton genuinely, passionately loved war. In the end, of course, he didn't get it," Carlson continued. "Trump blocked him at the brink of more than one conflict. Bolton finally left amid well-deserved humiliation. Bolton's resignation was one of the highlights of the president's first term."

Carlson slammed the media for celebrating Bolton during his resignation.

"The media were sad to see John Bolton go. They love wars. Wars mean they get to move tanks around on a screen and talk about weapons systems," Carlson said. "And so suddenly, for the first time, they love John Bolton. What a hero he was."

Carlson also asked how Bolton, who disagreed "so completely" with Trump, ended up with a position of power within the administration before dismissing Bolton's book and the impeachment as a "sideshow."

"Will John Bolton testify? Who knows? Either way, it won't change the outcome. Trump will be acquitted," Carlson said. "It's a totally stupid sideshow. We'll be embarrassed about it later."