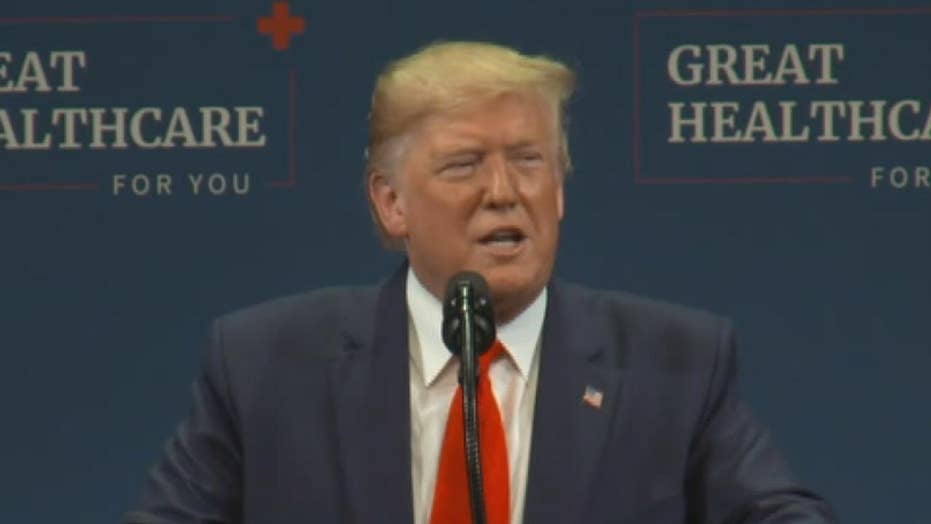 President Trump delivers remarks on Medicare at The Villages, Florida.

President Trump mocked the mainstream media Thursday by sarcastically “admonishing” a supporter who yelled “lock her up'” when speaking about Medicare in Florida.

Trump was criticizing Democratic Medicare-related talking points when someone in the crowd shouted “Lock her up,” which was a rallying call of Trump supporters during the 2016 campaign against Hillary Clinton.

Trump grinned and backed away from the podium before acknowledging the supporter.

“It’ll never end. I’m sorry I smiled, the fake news is back there,” Trump said, while pointing to the media. “Look at all of them. They’ll say, ‘It’s terrible, it’s terrible. The president smiled.’”

Trump then said the media wants him to condemn such rhetoric from his supporters.

“They want me to admonish you. Who… who said that, ‘Lock her up?’ Stand up please. I’m admonishing you. Never, ever say that again,” Trump joked. “He’s admonished. So now they can’t do their fake number on us.”

Trump then went back to condemning Democratic talking points and then later in the same event Trump reacted to the same supporter shouting for a second time.

“I sort of like him, I can’t admonish him again,” Trump said."I think it's the same guy. He's got a powerful voice."