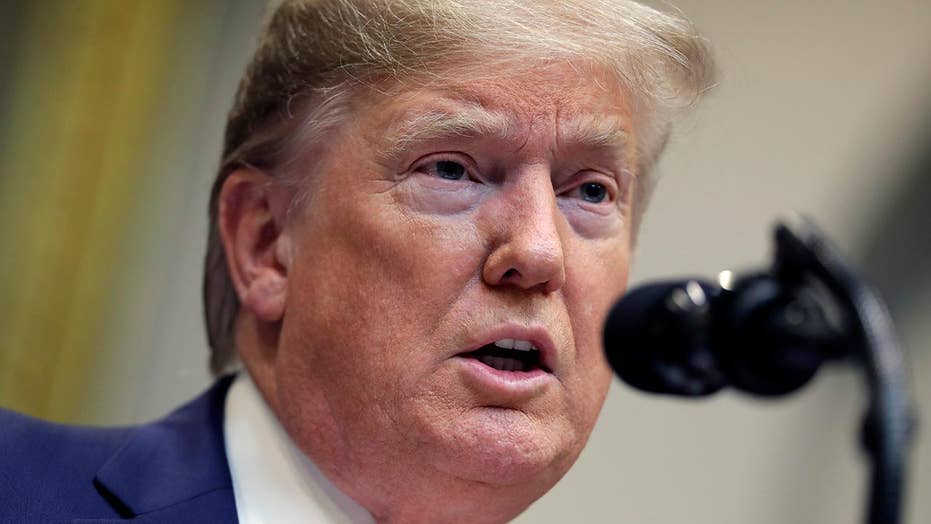 Trump on deadly Ukraine plane crash: 'I have my suspicions'

President Trump says the Ukraine passenger jet that went down shortly after takeoff in Iran was flying in a 'pretty rough neighborhood' and somebody may have 'made a mistake.'

Iran is one of those thorny issues that has cracked the usually rock-solid support for President Trump among conservatives and Republicans.

There’s nothing resembling a revolt, but it’s fascinating, given how not a single GOP House member abandoned him on impeachment, that the airstrike against Iran’s top general has caused this fissure.

Take Mike Lee, the conservative Utah senator and fervent Trump ally. After administration officials spoke to lawmakers of both parties about the killing of Qassam Soleimani, Lee, in front of the cameras, called it the “worst briefing” he’d ever seen, one that he found “insulting.”

And the officials had to leave, Lee said, “while they're in the process of telling us we need to be good little boys and girls and run along and not debate this in public. I find that absolutely insane. I think it's unacceptable.” On that basis, Lee said he decided to vote with the Democrats for the War Powers Act. (Trump told reporters that some legislators said “it was the best presentation they’ve ever seen.”)

Let’s face it, Congress long ago ceded much of its authority -- spelled out in the Constitution -- to declare war. In fact, the Hill adopted the law -- over Richard Nixon’s veto -- back in 1973, because Vietnam had raged for so long as an undeclared war.

There have been many unilateral military actions since then, and War Powers talk periodically erupts when the opposition party wants to take a stand against the president in question. Obviously, as Trump said yesterday, a president in the nuclear age has to be able to make split-second decisions, and respond to emergencies, without waiting for the legislative bureaucracy.

Given the widespread fear about escalating action against Iran, there was little question that Pelosi would push such a measure through the Democratic House, though its fate in the Senate remains uncertain.

A similar divide has played out in the media, and on Fox News. Sean Hannity, for instance, has strongly backed the president, calling the drone strike “a huge success. The world is safer. One of the world's worst most powerful terrorists is dead. The mob in the media, Democratic Party, they just seem distraught.” He noted, though, that neither he nor Trump want “boots on the ground.”

But Tucker Carlson has warned that the same people who brought us the Iraq invasion are now beating the war drums on Iran.

“As recently as last week,” he told viewers, “most people didn't consider Iran an imminent threat.” As for those providing the intelligence, “it seems like about 20 minutes ago, we were denouncing these very people as the deep state and pledging never to trust them again without verification. But now, for some reason, we do see to trust them, implicitly and completely.”

Buzzfeed reports that “according to a source with knowledge of the conversations, Trump told people that he had watched Carlson’s show and it had affected his view on the Iran situation.” And Mediaite reports that Carlson “received heaps of bipartisan media praise” as a result.

Trump’s televised address, which included shots at the Obama administration’s Iran deal, drew plenty of laurels on the right. But Brian Kilmeade said on “Fox & Friends”: “You have got to bring people together as the president and continue to take shots at President Obama three and a half years later doesn’t make any sense.”

Of course, all of this pales compared to the chasm between the parties. Trump on Thursday accused Pelosi of “defending a monster” -- she’s done no such thing, saying Thursday that Soleimani “was a terrible person, did bad things -- and Kevin McCarthy offered similar criticism.

That, in turn, provides a reminder that there is the little unfinished business of impeachment. For those who read the tea leaves on such things, Pelosi dropped a hint by saying she would probably send the articles to the Senate “soon.”