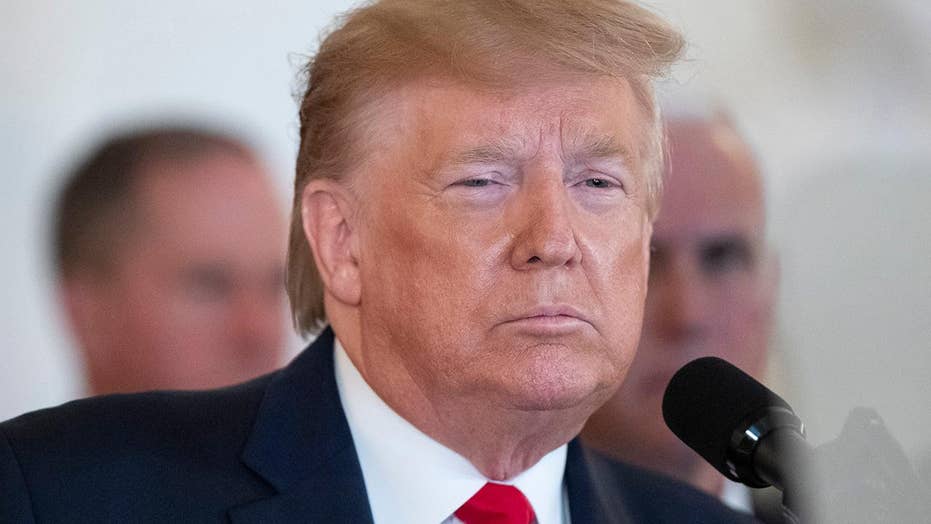 Trump calls on other nations to break away from Iran deal

The president says everyone must work together to make a deal that makes the world safer and more peaceful; John Roberts reports from the White House on the remarks.

President Trump’s televised speech was filled with dire threats against Iran, to be sure, but ended with an olive branch and seemed designed to defuse the military confrontation between the two countries.

In the process, he blamed the Obama administration for the nuclear deal he abandoned, and sounded like a candidate as he boasted of rebuilding the military and achieving energy independence.

But Trump did take a step towards de-escalation, and if the sum total of the Iranian response is firing a few face-saving rockets with no casualties, he may well come out the winner -- much as his detractors are loath to admit it. Whether the strike against Qassam Soleimani was reckless or not, what most people will remember is that Trump took out one of the world’s top terrorists and suffered no damage in return.

It’s no accident that Trump led his speech vowing never to let Iran obtain nuclear weapons -- though it will be hard to achieve that if he imposes his promised sanctions.

It’s no accident that he blasted the Obama nuke agreement: “Instead of saying thank you to the United States, they chanted ‘death to America.’”

It’s no accident that Trump said Soleimani was planning new attacks but dropped the argument—after Hill Democrats said the intelligence was vague—that such attacks were “imminent.”

And it’s certainly no accident that Trump closed by saying America wants peace and Iran can have a prosperous future -- essentially the same case he’s made to North Korea, unfortunately with little to show for it. There’s a reason that NBC’s Richard Engel said this was “Trump perhaps at his most measured.”

The president’s address came as media criticism was hitting a crescendo. The press indictment was aimed not so much at the strike against Soleimani as at the administration’s confusing and sometimes contradictory messages in the aftermath.

That lack of clarity, to put it politely, fueled what the pundits already believe about Trump: that he doesn’t have a deep grasp of foreign policy, that he has no strategic vision, and that he lurches from one crisis to the next.

And yet, if the confrontation doesn’t escalate further, the president will have taken out one of the top terrorists in the Middle East, with Iran responding only by lobbing some rockets at Iraqi bases and killing no one. Of course there are other repercussions, such as Iraq’s move to expel U.S. forces, that have yet to play out. But in purely political terms, Trump demonstrated strength by strongly responding to the killing of an American contractor and the siege at the U.S. Embassy in Baghdad.

If what followed the drone strike has been messy, well, that is Trump’s style, for better or worse.

“The president who promised to bring troops home from the Middle East is now dispatching more instead. The Pentagon sent a letter saying it was withdrawing from Iraq, only to disavow it as a mistake. The State Department talked about “de-escalation” while Mr. Trump beat the war drums describing all the ways he would devastate Iran if it harmed more Americans. And even then, the president was forced to back off his threat to target Iranian cultural sites after his own defense secretary publicly said doing that was a war crime.”

And there was the DOD letter informing the Iraqis that U.S. troops are being withdrawn, only to have the Pentagon say this was a mistakenly released draft.

Trump, says the Times, “careens like a bumper car from one crisis to another, many of them self-created, rarely pausing to set a straight-ahead course but never lacking for energy and always willing to ram into other vehicles. No matter how much aides try to impose an orderly process, he still prefers seat-of-the-pants governance, leaving advisers scrambling to adjust.”

On Tuesday night, the Washington Post said, “a federal government now accustomed to shifting course based on the president’s whims was awaiting the commander in chief’s decision about how or whether to retaliate against Iran’s missile attacks… Mixed messages emanated from official White House channels — when aides shared any information at all.”

Politico said Trump’s actions “are stoking fears the Pentagon is losing its prized credibility…Top military leaders have had to cover for the president, in some cases dodging direct responses to Trump’s comments and in others pretending Trump didn’t say what he said.”

All that will quickly fade if U.S. relations with Iran move from a hot boil to a low simmer. In the meantime, the media have relegated impeachment to the back burner.