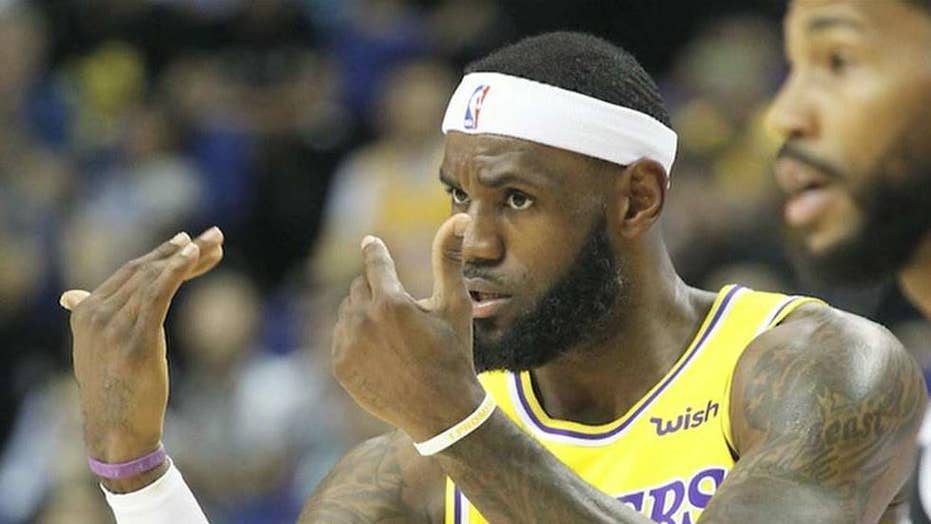 Multiple ESPN personalities have weighed in on the ongoing controversy between the NBA and China, with some defending superstar LeBron James for his recent remarks knocking Houston Rockets general manager Daryl Morey for his tweet supporting Hong Kong protesters.

On Monday night, James suggested that Morey was "misinformed" about the ongoing tensions between China and Hong Kong and that he didn't "think through" the tweet, which caused "harm" to people.

"I'm not here to judge how the league handled the situation,” he told reporters. "I just think that when you’re misinformed or you’re not educated about something – and I’m just talking about the tweet itself – you never know the ramifications that can happen. We all see what that did, not only did for our league but for all of us in America, for people in China as well. Sometimes you have to think through the things that you say that may cause harm not only for yourself but for the majority of people. I think that’s just a prime example of that."

Despite many protesters in Hong Kong saying James was on the wrong side of history, "First Take" co-host Stephen A. Smith insisted on Tuesday that James was correct.

"LeBron James said Daryl Morey could have waited. He's right about that," Smith said. "He basically accused Daryl Morey of not thinking about anybody but himself... The only other conclusion to draw is that Daryl Morey didn't know what he was doing, and it's hard to imagine that."

Smith went on to argue that Morey must have known the "potential fallout" of his tweet based on the Houston Rockets' ties to China.

"They are a communist nation. They do run their ship considerably different than ours, okay?" Smith continued. "We might have shared interests, but we don't have shared values... If we know that, Daryl Morey had to know that. He's too intelligent not to know that."

"So, LeBron James challenging him is basically saying, 'How could you have engaged in selective amnesia at that particular moment in time when you know we're all over there and we might have to deal with some stuff that we didn't ask to have to deal with?' And, I think LeBron James has a point there."

"NBA players go through media training as players, social media training, and they tell you different things before you hit the send button to rethink this... maybe GMs should go to media training and stuff like that," Perkins said. "Daryl Morey... is one of the most active GMs that tweets all the time... but I never once seen him tweet about things in his own country."

Perkins continued, "To send out a tweet like that was very selfish and you were not looking out for others, so LeBron is not the selfish person at hand, Daryl Morey actually is."

ESPN analyst Jay Williams suggested that players should "not say anything" on China policy whatsoever.

"There's nothing that LeBron James can say that will fundamentally change what a communist country is talking about or what they're doing right now. He's not going to change lives," Williams explained. "I understand that he's the social conscience of the NBA here as it relates to the United States... but you have to be strategic and tactical when you speak about this issue as it involves international politics. That's what you're dealing with- not just politics between the NBA and China but a trade war that's happening between our country and their country."