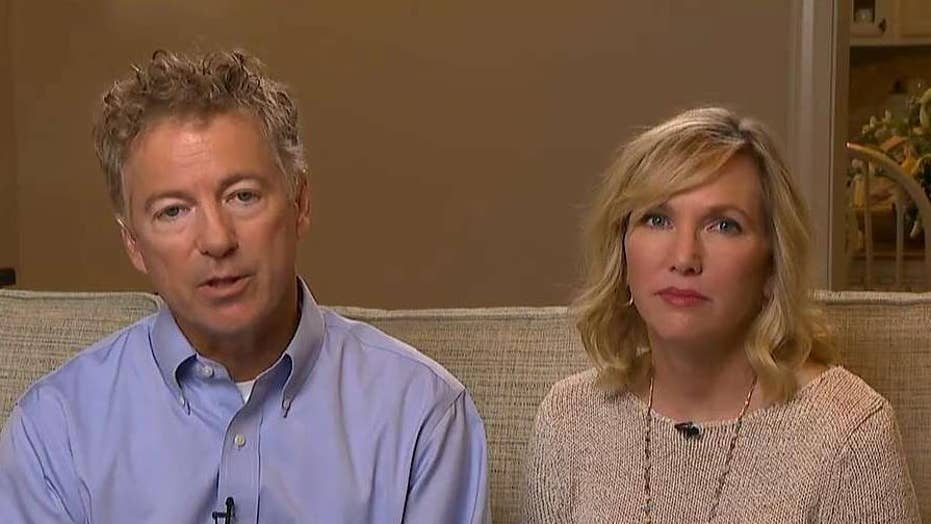 Sen. Rand Paul and his wife Kelley speak exclusively to 'Fox &amp; Friends' after his surgery to address injuries from an assault by his neighbor.

Sen. Rand Paul, R-Ky., said on Thursday that the left is blaming President Trump for his 2017 assault by his neighbor.

“I think this is the narrative that the left is bringing to us. Everything is President Trump’s fault,” Paul told “Fox & Friends,” in his first interview since being released from the hospital after having part of his lung removed.

The surgery was needed after Paul was assaulted by his neighbor Rene Boucher in November 2017 while mowing the lawn. Paul was tackled from behind and suffered six broken ribs, including three displaced fractures. His recovery was complicated by fluid and blood around the lungs, and pneumonia.

He lamented the politically motivated "hatred," saying people tweeted hateful comments at him before he underwent the surgery.

Boucher, a retired anesthesiologist, said the attack was sparked because he was agitated about piles of brush on Paul's property. Boucher also claimed Paul used his lawnmower – on the same day as the attack – and blew some leaves onto his property, igniting his outrage.

"The man who attacked me was known on the Internet. His social media postings were violent, he talked about doing violence to the president,” Paul said.

Paul went on to say, “That’s completely ignored because the media wanted to develop a narrative. I mean their whole narrative that it was an altercation or a fight. There was no fight. I had my back turned with noise cancellation headphones on and I was attacked and six of my ribs broken before I saw the attacker. In fact, I never saw the attacker until the attack was over.”

Boucher pleaded guilty in March 2018 to a federal charge of assaulting a member of Congress. He was sentenced in June 2018 to 30 days in federal prison and was ordered to one year of supervised release, a $10,000 fine and 100 hours of community service. He was also ordered to have no contact with Paul’s family.

Paul’s wife, Kelly, who accompanied him during the interview, said they had no idea the attacker had any “animus” toward them and they hadn’t spoken in 10 years prior to the attack.

“Thirty days is kind of what you would give a shoplifting person or a very, very minor crime. This judge was from out of state and from rumors around the courthouse had pre-decided this before she got here.”