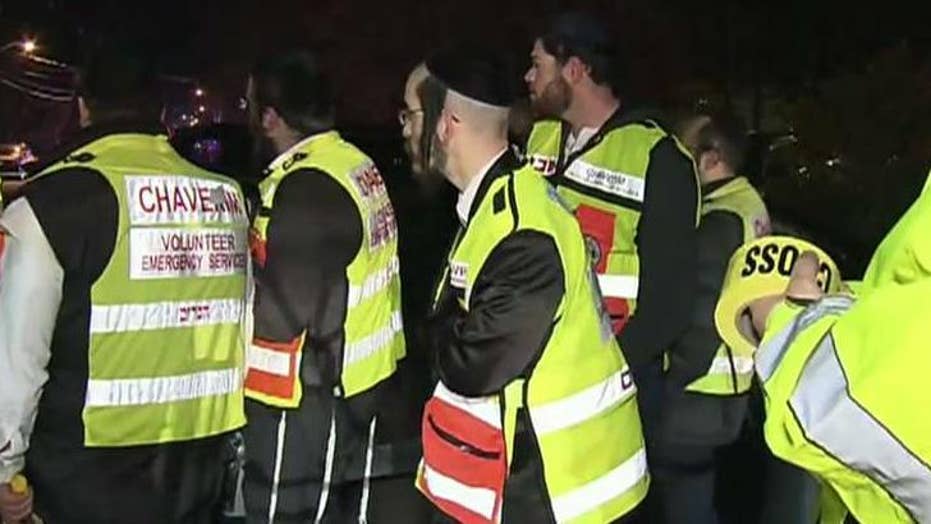 Rabbi from Tree of Life Synagogue on anti-Semitism in America

Rabbi Jeffrey Myers weighs in on the rise of anti-Semitism across the country.

Tree of Life Synagogue Rabbi Jeffrey Myers said Tuesday that the latest string of anti-Semitic attacks in the New York-New Jersey area, including a stabbing that injured five people at the home of a rabbi Saturday, represents a much larger concern in the country.

"Clearly, there is some rot to the core in America that we have this continued rise in anti-Semitic acts," Myers said on "Fox News Reporting."

"I'm saddened that there were people who were frightened to celebrate at that point the remainder of Hannukah, people who took a menorah out of their window and put it away, people who were afraid to go to synagogue because of this act," he told Fox News' Molly Line.

In October 2018, Myers was leading his Pittsburgh synagogue when a gunman shot dead 11 people and wounded six, making it the deadliest attack on the Jewish community in the U.S.

His comments came three days after police said Grafton Thomas, 37, allegedly stabbed five people at the rabbi’s home during a Hanukkah celebration in Monsey, N.Y.  He was charged Monday with federal hate crimes as details emerged about a series of handwritten journals found at his home that the FBI said appeared to "express anti-Semitic sentiments."

"It is a trauma not merely to those in Monsey, but it traumatizes the Jewish community throughout the United States when something like this happens," Myers said of the attack.

Saturday's incident reportedly marked the ninth anti-Semitic attack in one week, most of which occurred during Hannukah, investigators said. The uptick in anti-Semitic crimes came less than two weeks after the targeted attack and shootout at a kosher deli in Jersey City, N.J., that left several dead.

"Shame on America," Myers continued. "We're failing as a nation when we see rises in this sort of behavior on a non-stop basis. It says to me that we're not doing enough to make sure that we know our neighbors, to understand the people around us, to grow up in respect and love and understanding of each other."

Myers also blamed the "severe rhetoric coming from all sides of the political spectrum" for the recent uptick in anti-Semitic attacks.

"It also says to me that there is far too much severe rhetoric coming from all sides of the political spectrum, too much uncivil discourse that encourages people to speak that same way and... turn to acts of violence."

"We need to learn to tone down rhetoric," he reiterated, "and to understand and appreciate our neighbors better because when we do, we'll understand we're so much more alike than we are different."