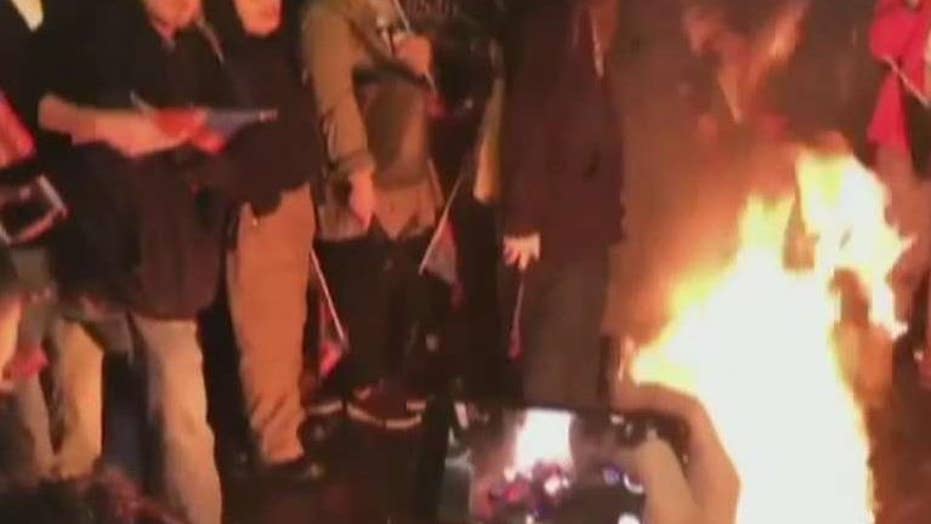 Minneapolis police were forced to use tear gas on violent protesters outside the president's campaign rally; Matt Finn reports on what happened.

A man wearing a red "MAGA" hat was surprisingly calm after someone appeared to spit on his face during an interview before President Trump's Thursday rally.

David Carlson was outside the Minneapolis rally when the incident occurred. Vice News correspondent Elizabeth Landers asked him a question when an unnamed protester sullied his face with saliva, according to the outlet.

After the spit hit his face, Landers' jaw dropped. "Oh nice," Carlson responded in a sarcastic tone before laughing and wiping it off his face.

Carlson said he was "fine" and a man walked up to him to say sorry that it had happened to him. Someone else followed, claiming that the incident wasn't representative of how people really felt.

"That's f-----g disrespectful," the unidentified man said. "But on the other hand, that s--t is disrespectful as f--k too," he added, pointing at Carlson's "Make America Great Again" hat.

Both Landers and VIce News Director Michael Learmonth seemed appalled by the event.

Protesters converged on Target Center, Minneapolis’ basketball arena, hours before Trump’s appearance, eventually packing the streets surrounding it. Many blew brightly colored whistles handed out by fellow protesters, adding to the din of frequent chants like, “Lock him up! Lock him up! Lock him up!” -- referring to Trump himself. Some clutched helium-filled balloons depicting Trump as a baby, similar to the famed Baby Trump balloon that flew above a nearby building.

The protesters also set fire to Make America Great Again hats and other memorabilia in an effort to show their defiance to the current administration before police broke up the crowd. There were reports that multiple protesters were arrested. One report indicated that protesters threw urine.