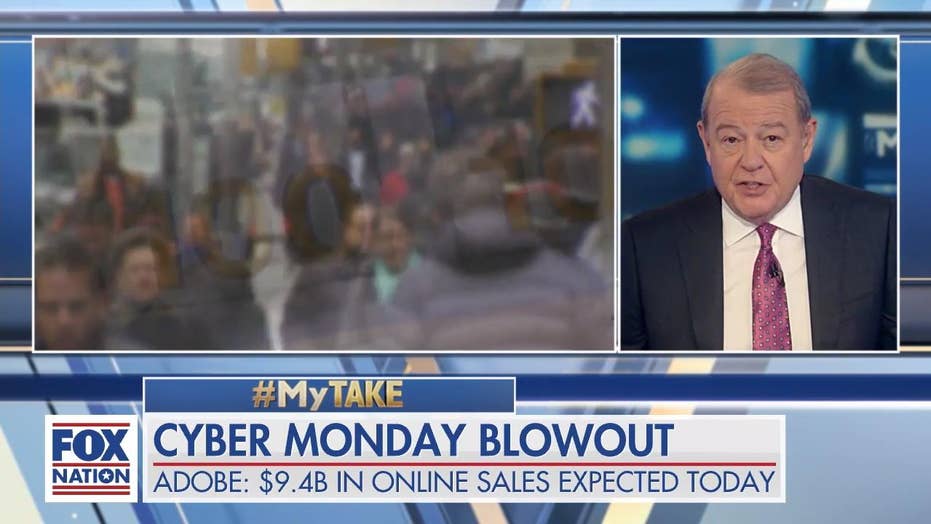 Fox Business Network host Stuart Varney said he believes that surging online holiday sales and persistent fears of a European recession put President Donald Trump in a strong position at home and abroad as he heads to the NATO Summit in London and Democrats prepare for another week of House impeachment hearings.

"[President Trump] is in the driver's seat when it comes to prosperity and presidential power. The impeachment drive is increasingly irrelevant," said Varney on Fox Nation's "My Take."

In the second-largest online sales day ever, Black Friday shoppers spent $7.4 billion, according to preliminary data published by Adobe Analytics.  Small Business Saturday sales reached $3.6 billion dollars, representing an 18% increase over 2018, and Cyber Monday is shaping up to be a record-breaker.

"The new week begins in fine style. It is Cyber Monday and record online sales are confidently expected," continued Varney. "Actually, the whole Thanksgiving period has become an online selling bonanza. It should add up to maybe $20 billion in sales from Thursday through Monday? Huge.

"The wealth effect is kicking in," he said. "That is, people feel able to spend more because their investments, especially their pension savings, are doing so well. Stocks have gone straight up since the early fall. Consumers have money to spend. These are prosperous times."

On Monday morning, the president explicitly linked this NATO trip with the Democrats' impeachment push, tweeting: "Heading to Europe to represent our Country and fight hard for the American People while the Do Nothing Democrats purposely scheduled an Impeachment Hoax hearing on the same date as NATO. Not nice!"

"The president has leverage," Varney concluded. "America has the most dynamic economy of any industrial democracy. Europe bitterly divided and on the brink of recession, all eyes on Trump."