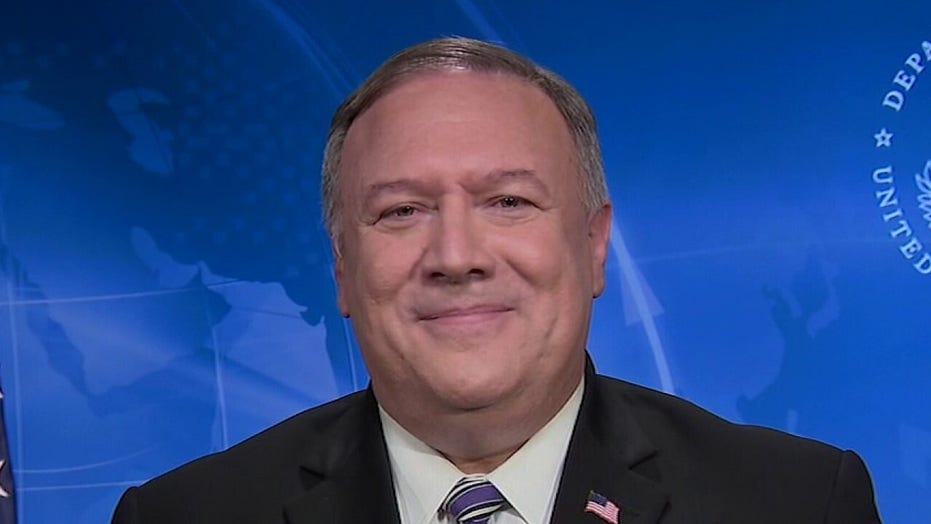 Secretary of State Mike Pompeo joins Martha MacCallum with insight on 'The Story.'

"I remember Secretary Kerry saying that if the nuclear deal was abandoned that Israel would become more isolated when in fact just the opposite has now happened," he said on "The Story."

"They've joined hands and now they have many more partners across the region -- each of those countries, those gulf states recognize that the shared threat from the Islamic Republic of Iran is very very real and now they are working together, building out security and economic relationships and real ties between these countries," he said.

"It'll be truly stabilizing for the Middle East to see what happens tomorrow in Washington, D.C."

TRUMP NOTCHES STRING OF PEACE DEALS: WHAT TO KNOW

In 2015, Kerry said: “I fear that what could happen is if Congress were to overturn it, our friends in Israel could actually wind up being more isolated and more blamed.”

Pompeo's comments came as Israeli Prime Minister Benjamin Netanyahu is expected to join leaders from Bahrain and the United Arab Emirates on Tuesday in signing agreements normalizing relations between the nations.

The Secretary of State also derided comments from House Speaker Nancy Pelosi, D-Calif., who attempted to downplay the importance of the peace deals President Trump's administration helped negotiate between Israel and other Middle Eastern nations.

Pompeo told "The Story" anchor Martha MacCallum that those deals were "remarkable." "So cynical," he said in response to a clip of Pelosi. "It's a remarkable accomplishment. The administration and President Trump had set the conditions for peace in the Middle East. There's real progress that tomorrow, we'll have the Israelis, the Bahrainians, the Emirates all in Washington to sign agreements normalizing relationships amongst the countries. It's a great day."