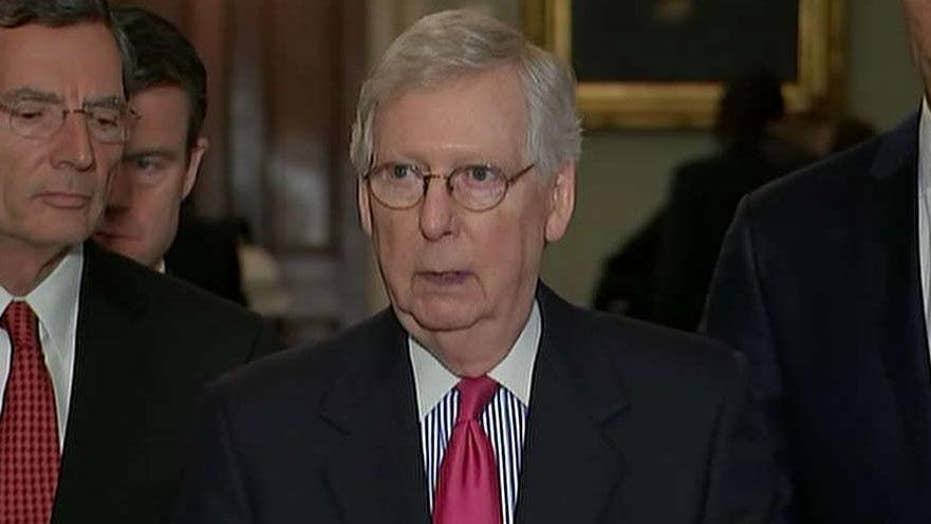 Mitch McConnell urges a lowering of the political temperature

House Speaker Nancy Pelosi, D-Calif., on Wednesday repeated a now-viral descriptor for the Senate's majority leader, prompting criticism from one of his colleagues in the chamber.

"Moscow Mitch says that he is the Grim Reaper," Pelosi said, echoing MSNBC host Joe Scarborough. "Imagine describing yourself as the Grim Reaper, that he’s going to bury all this legislation."

The Speaker made those comments during an event with the Illinois Democratic County Chairs' Association in Springfield, Ill., The Hill reported.

Scarborough and others have vehemently denounced Sen. Mitch McConnell's decision not to pursue election-security legislation amid revelations about the extent of Russian meddling in the 2016 election.

"He is aiding and abetting Vladimir Putin’s ongoing attempts to subvert American democracy, according to the Republican FBI, CIA, DNI, intel committee," Scarborough previously said. "All Republicans are all saying Russia is subverting American democracy and Moscow Mitch won’t even let the Senate take a vote on it. That is un-American!"

"Way to elevate the dialogue," Cornyn wrote, alongside a hashtag that read "shameless." McConnell himself appeared to respond to a Washington Post columnist calling him an "asset" of Russia.

"I don't normally take the time to respond to critics in the media when they have no clue what they're talking about," McConnell said. "But, this modern-day McCarthyism is toxic, and damaging, because of the way it warps our entire public discourse.

"Facts matter," McConnell said. "Details matter. History matters, and if our nation is losing our ability to debate public policy without screaming about treason, that really matters. In the middle of the 20th century, the original McCarthyism hurt America's strength and diminished our standing in the Cold War by dividing us against ourselves."