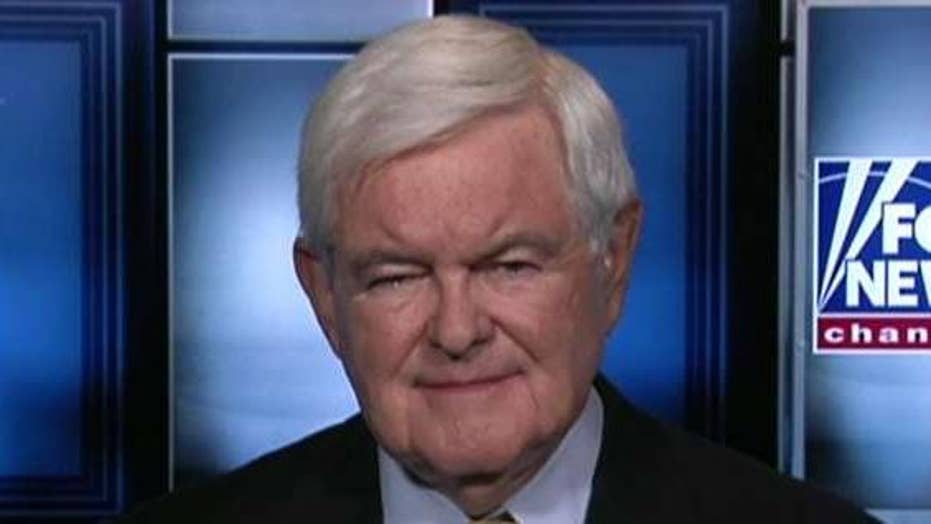 Former House speaker and Fox News contributor Newt Gingrich reacts to President Trump shooting down speculation of a payroll tax cut and his feud with Reps. Tlaib and Omar on Israel.

President Trump is still willing to take the necessary risks to “deal” with China despite talk from many about a potential economic downturn, Newt Gingrich said Thursday.

Appearing on “America’s Newsroom,” Gingrich told host Sandra Smith that he thought the president waivered “in part based on the news media coverage.”

He noted that as news of a possible recession continuously circulated, the White House “went all out putting Larry Kudlow and others on TV saying, ‘Oh, things are fine; don’t worry about it.’”

Then, just one day after considering a tax cut to promote economic growth, the president pivoted and said that the nation already had a “strong economy.”

Trump told reporters on Thursday: “I'm not looking at a tax cut now. We don't need it; we have a strong economy. Certainly, a payroll tax cut -- President Obama did that in order to artificially jack up the economy. President Obama had zero interest rates. I don't have zero interest, I have real interest rates. And, despite that, I have a strong economy.”

Additionally, he commented that the idea of indexing the capital gains tax to inflation would be “perceived, if I do it, as somewhat elitist.”

The comments came in the wake of recent market volatility and uncertainty amid a testy trade war with China and chatter about a possible recession.

On "America's Newsroom," Gingrich said the change of heart paints a clear picture of how the administration thinks the economy is tracking.

“I think they’re pretty well convinced that, in fact, we’re not going to have a recession in the near future and they don’t need any of those tools,” said Gingrich.

He added: “I also think the president is a businessman who understands that a very short-term limited payroll tax cut isn’t much of a boost. If you get permanent tax cuts, it’s a different thing because it changes your behavior. If you have a very short-term tax cut, frankly, you just go spend it.”

That said, analysts have warned that a slowdown could hit before the 2020 election. The president has largely blamed the Federal Reserve and Chairman Jay Powell.

On Thursday morning he tweeted: “Our Federal Reserve does not allow us to do what we must do. They put us at a disadvantage against our competition…The Economy is doing really well. The Federal Reserve can easily make it Record Setting! The question is being asked, why are we paying much more in interest than Germany and certain other countries?”

Furthermore, the president has indicated he had no choice but to impose trade penalties that have been a drag on U.S. manufacturers, financial markets, and American consumers.

The world economy has been slowing in recent months, and stock market swings have added to concerns that the U.S. economy is not impervious.

“On the other front, remember part of what’s happening worldwide is that the American economy is probably the strongest single economy in the world right now,” Gingrich stated.