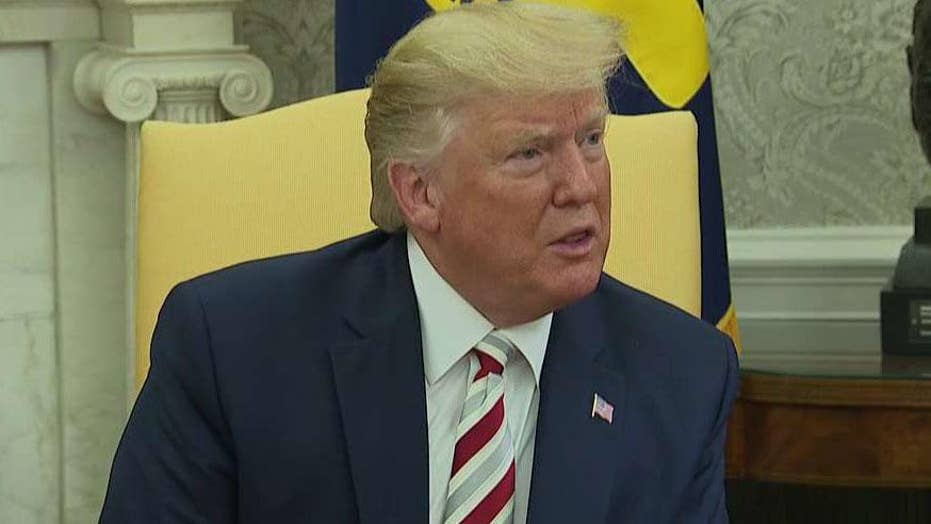 Trump discusses the U.S. economy ahead of meeting with Romanian president at the White House.

President Trump confirmed Tuesday that he's been considering a payroll tax cut but rejected the notion that he's worried about a possible recession on the horizon.

Speaking to the media before a meeting with Romanian President Klaus Iohannis in the Oval Office, Trump called warnings that the country may be heading into a recession “inappropriate” and noted that a possible cut in payroll taxes was something he had been considering for a long time.

“Payroll taxes is something we think about all the time and a lot of people would like that,” Trump said.

He was responding to reports that the White House is in the early stages of internal discussions about a potential payroll tax cut as one of a number of possible measures to boost the economy. Sources said Monday that while some Trump administration staffers have discussed a temporary payroll tax cut, talks have remained at the staff level.

On Tuesday, Trump suggested the idea has been an option for a while -- but was unclear about how seriously it's being considered and argued the recession warnings in the media are not a driving factor.

“I’ve been thinking about payroll taxes for a long time. Whether or not we do it now or not … it’s not being done because of recession,” he said.

White House Economic Adviser Larry Kudlow has echoed Trump’s assertion that the U.S. economy is not heading toward a recession – touting during an interview on “Fox News Sunday” the economic gains under the administration.

“First of all I don’t see a recession at all,” Kudlow said. “Second of all the Trump pro-growth program, which I believe has been succeeding, lower tax rates, big rollbacks of regulations, energy opening, trade reform, we’re going to stay with that.

Kudlow added: “We believe that’s the heart of the free enterprise we want and incentive oriented supply-side economy providing opportunities for everybody across the board.”

“It's not being considered at this time but he's looking at all options out there to try and give people back so much of the hard-earned money they've made,” White House Deputy Press Secretary Hogan Gidley said Tuesday during an appearance on Fox News' “America’s Newsroom.”

Revenue from the payroll taxes is used to fund Medicare and Social Security programs.

The Trump administration has expressed optimism about the strength of the U.S. economy amid signs of slowing growth and trade tensions with China. Trump has repeatedly criticized Federal Reserve Chairman Jerome Powell and called on the central bank to cut interest rates.