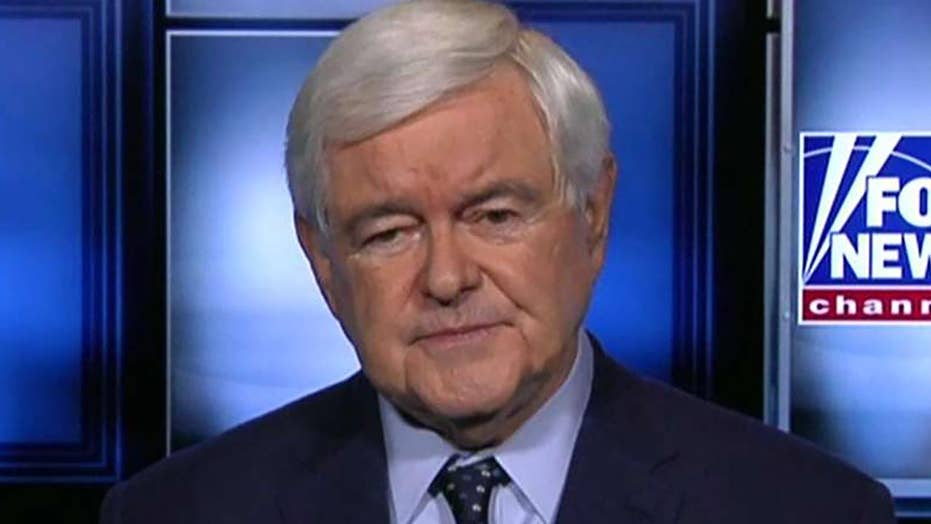 Former House Speaker Newt Gingrich says Democrats are trying to impeach President Trump because if he's in the 2020 race he will win.

Gingrich said he believes Democrats know Trump is going to win reelection next November and the impeachment is being driven more by politics and Democrats' "hatred" for the president.

"If he is in the election, he is going to win. How do they get him out of the election? This is the most bizarrely anti-constitutional gimmick I think I have ever seen. There is zero basis for what they are doing. Just listen to them talk about it. There is nothing constitutional about trying to impeach a president because you don't like him. And that's the bottom line here," he said.

JUDGE JEANINE: WE NOW HAVE CONFIRMATION THAT THE DEEP STATE EXISTS

As the process moves forward in the House toward a full vote on impeachment articles, Gingrich pointed to Rep. Jeff Van Drew, D-N.J., moving to switch parties. Van Drew has been adamantly opposed to top Democrats on the impeachment push.

"Left-wing Democrats are very happy attacking Donald Trump. Independents and Republicans think it's a total waste of time and that it's wrong and they've been losing ground. They just had a Democrat switch parties because they are losing ground, not gaining ground," said Gingrich, adding that the case for impeachment was always "weak."

"They had a very weak case and gave it to [Adam] Schiff, who is a liar and frankly looks sort of like a Soviet-era prosecutor. He is not a very believable person. ... Then they give it to [Jerrold] Nadler, who is just terrible on television. Every day this goes on they get weaker and Nancy Pelosi, who is not stupid, has figured out she couldn't stop it because her left would have cannibalized her. So she had to go through with it, but this is a worse nightmare than she expected," said Gingrich.

Gingrich claimed Trump has become more popular since the impeachment inquiry started, with some approval polls putting him above 50 percent in some surveys. The latest Fox News Poll - released Sunday - shows 45 percent of voters approve of the job Trump’s doing, up from 42 percent in late October, while 50 percent support impeachment and removal from office, up one point from late October.

Rep. Jerrold Nadler, the chairman of the House Judiciary Committee, wrote that Trump is a threat to the Constitution and should be removed from office, according to the committee's 658-page report on the articles of impeachment resolution against Trump that was submitted early Monday.

The majority wrote that Trump abused his office by soliciting the interference of Ukraine in the 2020 election and then obstructed the impeachment inquiry into his conduct.

The report was released at 12:30 a.m. ET, and included a dissent from the committee's minority that called the case for impeachment "not only weak but dangerously lowers the bar for future impeachments."

Trump is accused, in the first article, of abusing his presidential power by asking Ukraine to investigate his 2020 rival Joe Biden while holding military aid as leverage, and, in the second, of obstructing Congress by blocking the House’s efforts to probe his actions.