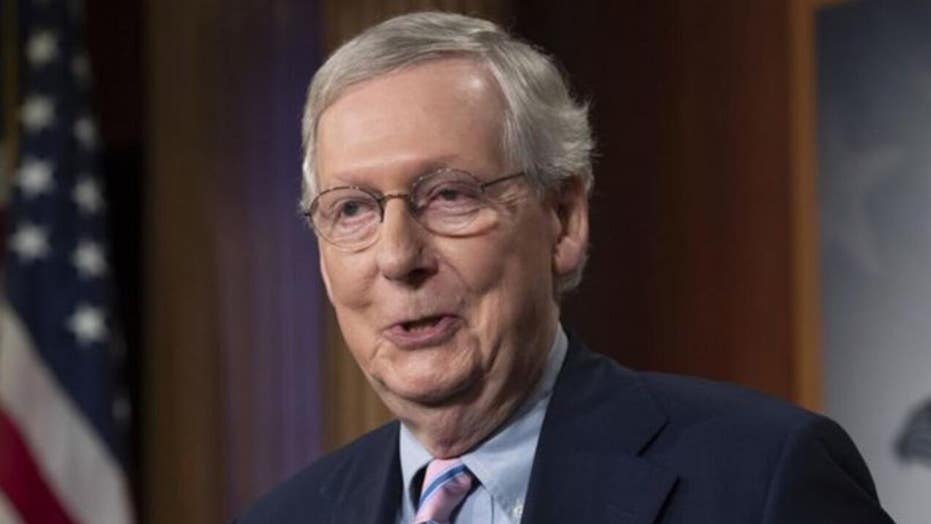 Senate Majority Leader Mitch McConnell, R-Ky., expressed outrage on "The Daily Briefing" Thursday over what he called "jaw-dropping hypocrisy" by Democrats in their response to allegations of sexual assault against former vice president and presumptive Democratic nominee Joe Biden.

"Hypocrisy is not unusual in Washington, but this is jaw-dropping hypocrisy," said McConnell, who compared the allegations against Biden to those made against then-Supreme Court nominee Brett Kavanaugh in the fall of 2018.

"Hypocrisy is not unusual in Washington, but this is jaw-dropping hypocrisy."

"It's interesting to watch the Democrats engage in jaw-dropping hypocrisy trying to defend the former vice president with less evidence by far...than in the Kavanaugh case," McConnell went on.

McConnell made the comment two days after House Speaker Nancy Pelosi declared the claims by former Senate staffer Tara Reade a "closed issue" in an interview with MSNBC’s Ari Melber.

McConnell also responded to calls from Democrats for a new round of coronavirus aid spending, saying he was hesitant to "keep throwing endless amounts of borrowed money at the problem" and calling for a safe reopening as the first step in healing the fractured economy.

"It's pretty clear to me that the way forward is for the economy to begin to open up," he said. "We've already added $2.8 trillion to the national debt over the last six weeks. We can't keep throwing endless amounts of borrowed money at the problem and hope to fix it. The way forward is to begin to safely open up our economy so people can begin to reengage and reinvigorate the robust economy we had as recently as a couple of months ago." 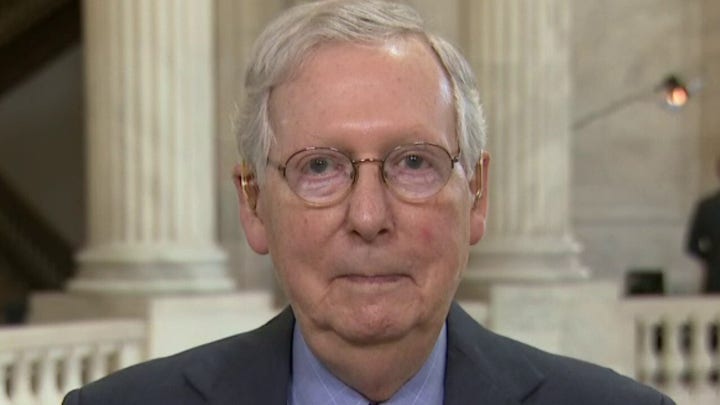 Senate Minority Leader Chuck Schumer, D-N.Y., has criticized McConnell for spending the first week back on judicial nominations instead of drafting legislation to address the economic fallout, slamming what he described as the majority leader's "let's wait and do nothing," approach on MSNBC earlier Thursday.

"Of course, no one is saying we should do nothing," McConnell fired back. "We've been quite busy. The PPP [Paycheck Protection Program] loans have gone out in massive numbers. Small businesses are given this bridge to get to the next place when hopefully the economy begins to open up again," he explained.

While the House is still technically on recess, Democratic leadership and committee chairs have been drafting their legislative laundry list for the relief package that could rival of exceed the cost of the $2.2 trillion CARES Act that passed in March.

"What I don't hear our Democratic colleagues say anything about is getting back to normal," McConnell argued. "The government shut the economy down at the state level and was encouraged to do so at the federal level in order to deal with this health care pandemic.

"But now, we need to carefully begin to reopen our economy. And that may or may not involve another rescue package. It could well happen, but we need to be more measured in going forward and see how much growth and reinvigoration we can get out of beginning to reopen the economy."

For weeks, McConnell has been calling for liability protections for employers to spare them from litigation as the country’s shuttered economy begins to reopen.

"What I want to make very clear to them is if there is another rescue package, it must include and will include liability protections."

On Thursday, McConnell said he was expanding his proposal to include protection for "universities, doctors, hospitals, health care workers."

"There will be an epidemic -- it's beginning already, of litigation surrounding the pandemic of the coronavirus," he warned. "And as of a week ago, 771 lawsuits have already been filed. The trial lawyers are waiting to go after everybody who tries to get back to normal. Of course, the Democrats say, 'Oh, we can't possibly do that.'

"But I want to make very clear to them is, if there is another rescue package, it must include and will include liability protections related narrowly to the coronavirus pandemic that has affected every single state in America. That will have to be a part of any rescue package," McConnell added.

President Trump has supported McConnell's call for litigation protection, saying there "won't be another bill that does not include liability protections ... not just for businesses, but for universities and doctors and hospitals and firefighters and people like that who need to have that assurance before they can get back to work."

Asked whether he plans on including a payroll tax cut in the next rescue package, McConnell said he is considering the "various options."

"[If] We do another rescue package, it will obviously be a bipartisan product and it will require a presidential signature in order to make a law," he explained, "so the president and every one of these negotiations is the indispensable player."