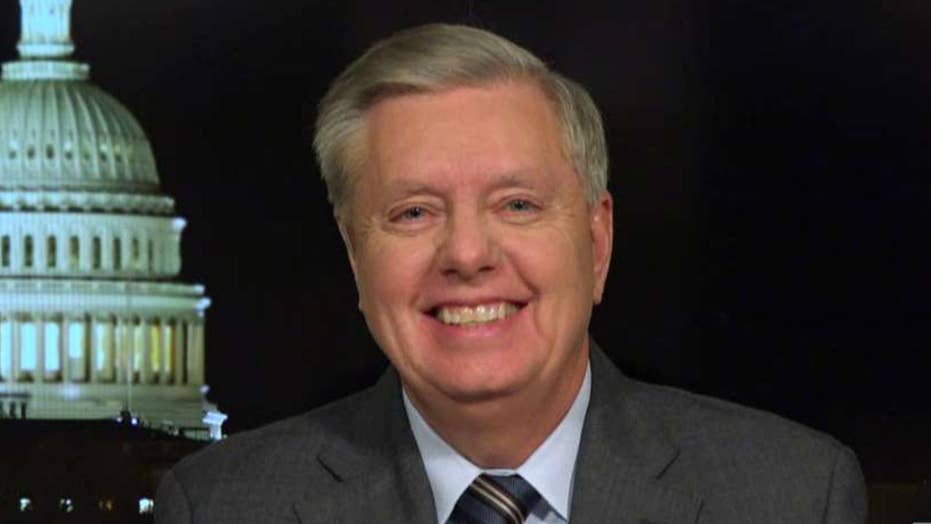 Graham: Pelosi would lose her job if she didn't move toward impeachment

Senate Judiciary Committee Chairman Lindsey Graham, R-S.C., said the impeachment of President Trump is proof that a left-wing "mob" has taken over the House of Representatives.

Graham told "Hannity" that House Speaker Nancy Pelosi, D-Calif., claimed earlier this year that impeachment should be thoughtful and "bipartisan."

"What happened between March and now?" he asked. "What happened [is] the mob took over the House. The mob is running the Democratic Party. If she did not move to impeach this president, she would not be Speaker."

Graham told host Sean Hannity that Pelosi effectively chose to preserve her position over the good of the country and added that he hopes Democrats will pay electorally next year.

He said Democrats are intent on destroying President Trump and his administration but predicted that the hurried, partisan impeachment proceedings will all but ensure his reelection.

"[T]he political consequences to this will be felt in the next election," he said. "Play this tape on election night [2020]. I will make a prediction here: the impeachment of this president by Nancy Pelosi, [Adam] Schiff, and [Jerry] Nadler will do as much to get Donald Trump reelected as that [Trump's] litany of accomplishments."

During the interview, Hannity asked how the South Carolina lawmaker believed moderate Republican senators will vote during the impeachment trial.

He mentioned Sen. Mitt Romney, R-Utah -- an occasional foil of the president -- as well as centrists Susan Collins of Maine and Lisa Murkowski of Alaska.

Graham said he predicts those Republicans, along with many others, will see the House proceedings as illegitimate and erroneous

"I think Republicans are going to be very reluctant to legitimize what the House did," he said, "because if you care about the presidency as an institution, what they did in the House is really a threat to the presidency."