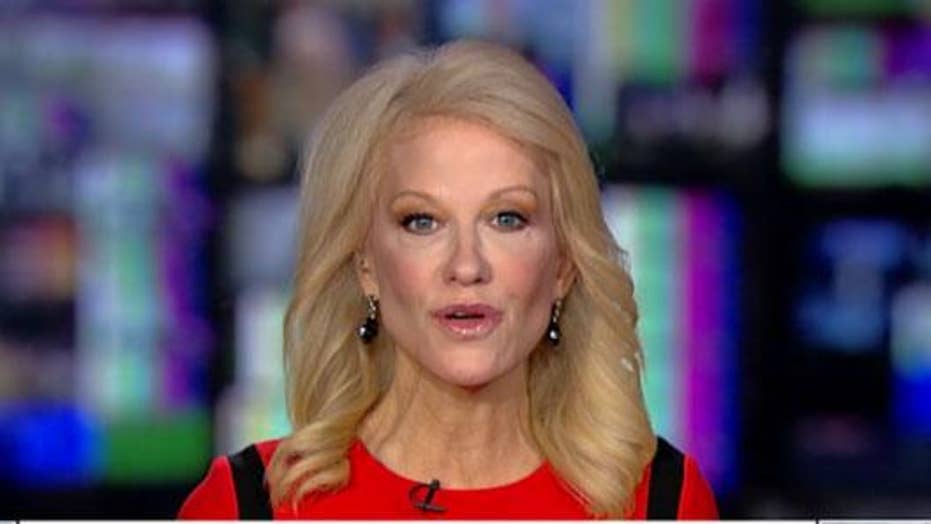 'Gossip girls' have to face their voters: Conway

Discussing impeachment, White House counselor Kellyanne Conway says Democrats have to explains to their voters what they've done for them lately

A bizarre 48 hours that saw Kellyanne and George Conway on rival liberal networks culminated in an even stranger magazine story with a shocking take on Kellyanne's job.

White House senior adviser Kellyanne Conway lashed out at CNN’s Wolf Blitzer on Thursday for implying her marriage has “issues” after her husband had appeared on MSNBC a day earlier, so she probably did not appreciate Vanity Fair's story just hours later citing anonymous sources who claim George Conway thinks she’s trapped in a “cult.”

The liberal magazine’s piece, headlined “’George gets all his power from you’: Kellyanne caught in West Wing crossfire as George goes full resistance,” cites three anonymous sources who claim the political power couple have “become increasingly distant as impeachment has gained steam.”

George Conway often mocks President Trump on Twitter and made a rare TV appearance during MSNBC coverage of the impeachment hearing.

Kellyanne Conway slammed CNN’s Blitzer when he attempted to get a reaction on her husband’s anti-Trump thoughts, specifically because he began the exchange by awkwardly saying he knows “that there are issues” in their marriage.

“What did you just say? Did you just say there are issues there? You don’t want to talk about … why did you say that?” Conway asked. “I think you embarrassed yourself.”

“You should not have just said to your audience, ‘I don’t want to talk about your marriage, I know there are issues,’" Conway said. “Why would you say that? What is it you know that I don’t?”

She added, “You wanted to put it in my husband’s voice because you think somehow that it will help your ratings or that you’re really sticking it to Kellyanne Conway.”

Hours later, Vanity Fair published its piece that claims “a Republican who has spoken frequently with George” said “he tells people she’s in a cult.”

Kellyanne Conway did not immediately respond to a request for comment.

Vanity Fair cited another anonymous source who claimed their marriage won’t improve “until she’s cast out of the cult” and a third nameless source vaguely described as a “Republican close to the administration” who claims Trump has blamed Kellyanne for her husband’s Twitter outbursts.

Meanwhile, far-left comedian Kathy Griffin tweeted a photo of herself alongside prominent Trump critics and media members including E. Jean Carroll, Paul Krugman, Philippe Reines, Soledad O'Brien, Molly Jong-Fast, Michael Ian Black this week with the hashtag “ImpeachmentHearings. The photo, which also features George Conway, led many to believe that he gathered to watch the first day of impeachment hearings with the famous liberal.

However, Vanity Fair reported that the photo was from a dinner party held earlier this year, months before the nationally televised impeachment testimony.