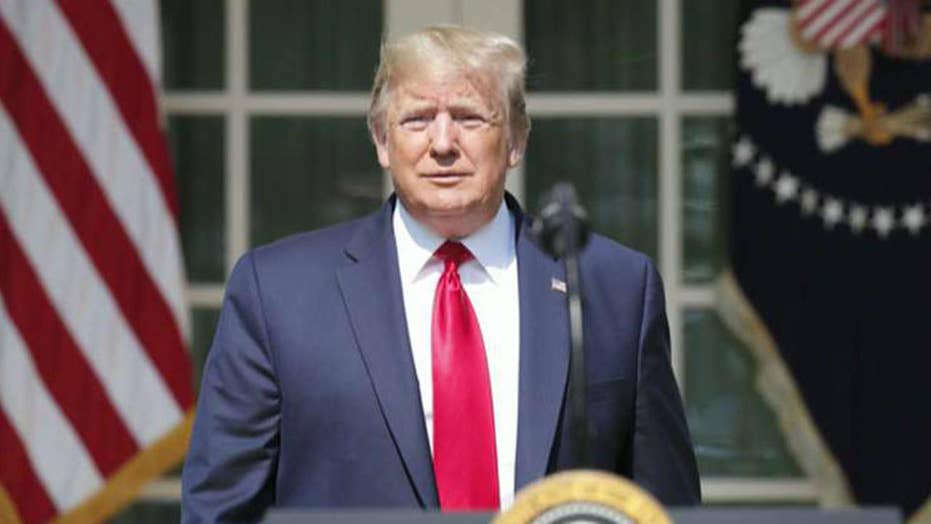 President Trump doubled down Wednesday on remarks he made earlier this week suggesting that Jewish Americans who vote for Democrats either lack knowledge or show “great disloyalty” to other Jews, but Fox News contributor Karl Rove said "there are better ways" to appeal to Jewish voters.

Trump escalated tensions between himself and two Muslim congresswomen, Reps. Rashida Tlaib, D-Mich., and Ilhan Omar, D., Minn., who he says "hate" Israel and Jewish people, when he told reporters in the Oval Office Tuesday that "any Jewish people that vote for a Democrat -- I think it shows either a total lack of knowledge or great disloyalty."

Rove told Fox News' Marth MacCallum on "The Story" Wednesday that the president's record on diplomacy with Israel would be a better talking point to win over Jewish voters, 71 percent of whom voted for Hillary Clinton in the 2016 presidential elections, according to exit poll data from the Pew Research Center. Trump got only 24 percent of the Jewish vote.

"He's been a great ally and friend of Israel, starting with his decision to withdraw the United States from the Iranian nuclear deal, and he could also strongly make the argument that there are elements inside the Democratic party like  Rep. Tlaib and Rep. Omar who are basically anti-Semitic," Rove said. "Rep. Tlaib wrote for a Louis Farrakhan publication. Their visit to Israel was being sponsored by a group that claimed that Christian blood was being used in Jewish Passover ceremonies, and has talked about the 'so-called Holocaust tale.'"

"He could find better language to make both those points," Rove continued. "He's got a record that will do him well in the Jewish community and raise that number up from what it was in 2016."

In the 2018 midterm elections, 79 percent of Jewish voters supported Democrats, compared with 17 percent for Republicans, according to Pew.

"One of the things about the Jewish community has been that it has had strong supporters in both parties and that's going to continue," Rove said.

"The president has better ways to make the argument, which he can easily make; that he's been a great ally of the state of Israel, that he stood with them against terrorism, that he stands with them against the BDS [Boycott, Divestment, Sanctions] movement, that he stands for a strong relationship between the United States and Israel, that he took the United States out of the Iranian nuclear deal which the Israelis were deeply concerned about."