Frustration is mounting among White House correspondents attempting to get answers from White House press secretary Karine Jean-Pierre, as her deflections and obfuscations over questions about President Biden's handling of classified documents wear thin.

"The White House press corps is incredibly frustrated with Jean-Pierre for refusing to answer any questions about this issue at the briefing room," a White House reporter told Fox News Digital. "It's very insulting to reporters especially when she repeatedly says she has answered a question when she very clearly has not. But overall, it's clear the White House is challenging the fundamental purpose of the briefing room, which is why reporters continue to be aggressive."

Fox News' White House correspondent Jacqui Heinrich said Wednesday that reporters were being referred to a "black hole" while seeking answers from the White House, the White House Counsel and the Department of Justice (DOJ).

PRESS SEC BLASTED FOR CLAIMING TO BE ‘FORTHCOMING’ ON BIDEN CLASSIFIED DOCS: ‘A LIAR OF THE FIRST ORDER’

"It is frustrating to the press corps here at the White House… we formally asked for the press secretary to bring to the briefing room the attorneys for the president, so that we can ask people these questions, the very people that we’re being directed to and where we’re getting our questions ignored or unanswered or referred elsewhere. And she, again, when posed that question right there in the briefing room today, said well you’ll have to ask them," Heinrich told Neil Cavuto on Wednesday.

Jean-Pierre has claimed she's been "forthcoming" about the classified documents despite continuously referring reporters to the Department of Justice and the White House Counsel. She previously told reporters that the search for documents was "completed" before more documents were discovered two days later at the Delaware home.

This week, ABC's Cecilia Vega asked if Jean-Pierre had essentially been directed to lie, since the latest documents were discovered the day before Jean-Pierre declared the search was complete. 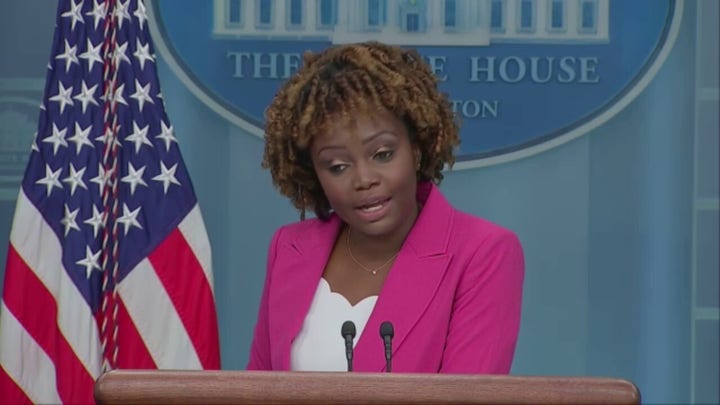 Jean-Pierre refused to defend her previous comments during Tuesday's briefing and declined to answer questions about whether it was safe to assume that all documents had been recovered.

She is causing consternation within the briefing room, and it's not the first time since she took over the job last May.

"Press secretaries should advocate for the press and the public to get important updates and help inform their reporting to reflect the truth. She is doing the exact opposite, and it is really hurting her credibility in the position," the White House reporter told Fox News Digital.

The reporter said it was the most difficult moment for Jean-Pierre since she poorly explained Biden's "Where's Jackie" gaffe last year, repeatedly defending Biden when he appeared to forget the death of Republican Congresswoman Jackie Walorski.

Another White House reporter said it felt like the White House Counsel's Office was sending her "into the lion's den unprepared."

"The counsel's office stonewalls during a single background briefing and takes heat, for what? Thirty minutes of regurgitated non-answers," they told Fox News Digital. "But she has to do her best with what seems like incomplete information."

"I think it's become increasingly clear also, the frustration, as people are trying to get some clarity because they really haven't answered some of the underlying facts about what has happened here. This is obviously this is going to continue, the special counsel's investigation has not even kicked off in ernest, so if this is the strategy, we'll see how long it can last," Wang said.

Other recent exchanges between reporters and Jean-Pierre bear out a fraying relationship, at least for now. 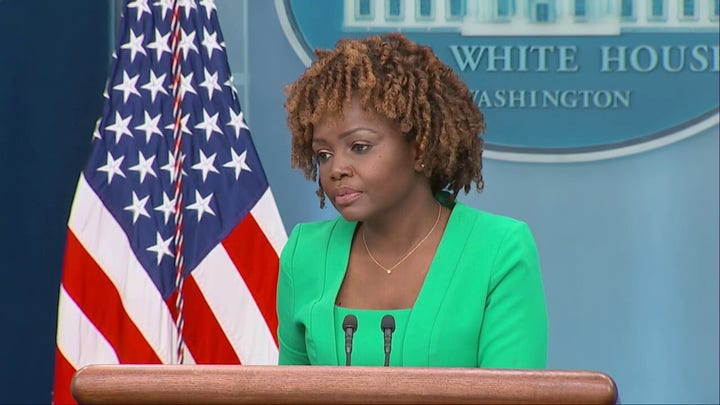 Last week, Jean-Pierre and CBS's Ed O'Keefe clashed in the briefing room over the issue, with Jean-Pierre accusing him of being "contentious."

Jean-Pierre bristled when O'Keefe reminded her that Biden had said early in his administration that he would acknowledge mistakes.

NBC's Peter Alexander pressed Jean-Pierre repeatedly about why the White House can't comment or speak to the "underlying facts" of the case this week.

"We've all reached out to the Department of Justice. A law enforcement official tells NBC News the Justice Department has not told the White House that it cannot talk about the facts underlying the special counsel investigation into classified documents. So trusting you've received that same information, understanding the desire to be prudent, then why? Why can't you speak about the underlying facts?" Alexander asked.

KARINE JEAN-PIERRE SHREDDED AFTER DODGES ON BIDEN CLASSIFIED DOCUMENTS: ‘NOT QUALIFIED FOR THIS JOB’

Jon Decker of Gray Television also had a tense exchange with Jean Pierre on Wednesday about the documents.

Decker asked Jean-Pierre about the president's previous remarks about Donald Trump's classified documents issues. After Jean-Pierre referred Decker to the Department of Justice, he attempted to ask another question and said she gave a "non-answer." 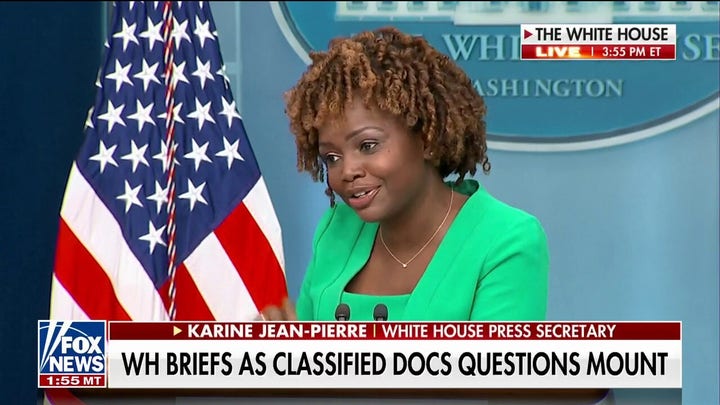 "It's a fact," Decker responded.

Today News Africa correspondent Simon Ateba, who has sparred repeatedly with the press secretary, said Jean-Pierre's handling of the questions had been "scandalous."

"Questions about timeline, locations, individuals involved, or even immediate steps the Biden administration is taking to secure classified documents or prevent further occurrences were not answered," he told Fox News Digital. "The incomplete information about all the batches of mishandled classified documents scattered between Washington and Wilmington, Delaware, left many reporters in the briefing room scratching their heads."

He added the past week had affected her credibility.

"Many reporters are wondering whether she can be trusted with the truth or is still a good fit for the job of press secretary," he said.

Fox News Digital reached out to the White House for comment.

Hanna Panreck is an associate editor at Fox News.