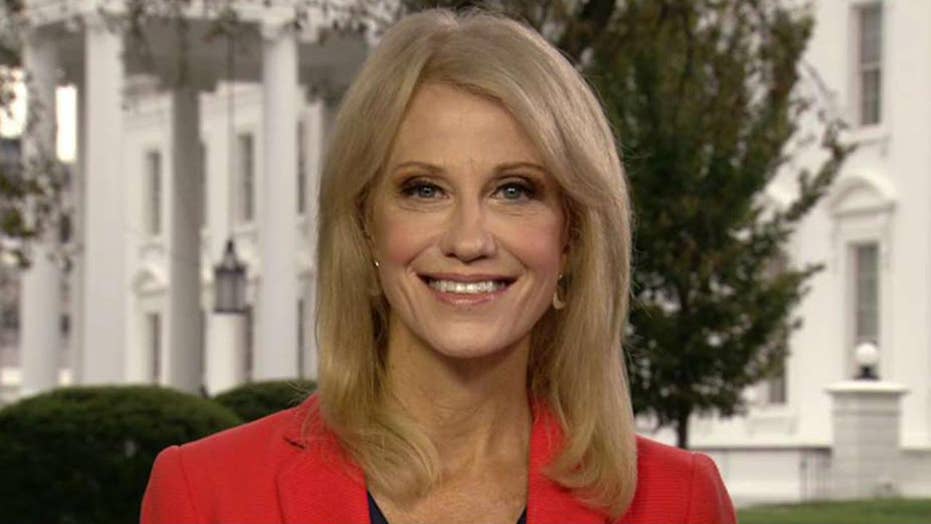 Counselor to the president Kellyanne Conway weighs in on the origins of the Russia probe investigation, Joe Biden slamming the role of the Trump children in the administration and responds to claims she threatened a reporter.

Joy Behar and her "The View" co-hosts reacted to White House adviser Kellyanne Conway's heated phone call with a reporter who took issue with the focus of her anti-Trump husband, George Conway.

The Washington Examiner's Caitlin Yilek was blasted by Conway for drawing attention to her husband's prolific tweets that disparage her boss, President Trump, suggesting that she shouldn't report on "her personal life."

"You’re really going places," Conway told Yilek. "Let me tell you something, from a powerful woman -- don’t pull the crap where you’re trying to undercut another woman based on who she’s married to. He gets his power through me, if you haven’t noticed."

"I like the way she says 'he gets his power through me' - touchy, touchy!" Behar said Friday. "You know, the reason why the reporter and everybody's interested in the relationship is because of remarks like that. She's taking him on and [George] Conway hates Trump more than I do! So that's news! That's news if you're married to somebody who is so diametrically opposed to your position."

Meghan McCain was in rare agreement with Behar, and pointed out how George Conway wrote an op-ed in The Atlantic saying the president was "mentally unfit for office" and that he "tweets more" than Trump.

Behar later clashed with her liberal colleague Sunny Hostin over whether or not Conway's conversation with Yilek was technically off-the-record, something Hostin thought it was -- calling it a "low blow" for the Examiner to release the recording.

"That's why the media gets this bad wrap, because it's not legally binding, this off-the-record, but it's culturally binding," Hostin told the panel, arguing that Conway's assistant was her "proxy."

When asked if it was "appropriate" for Yilek to respond to Conway's "bullying" by releasing the recording, Behar argued that she was simply "mimicking" Trump.