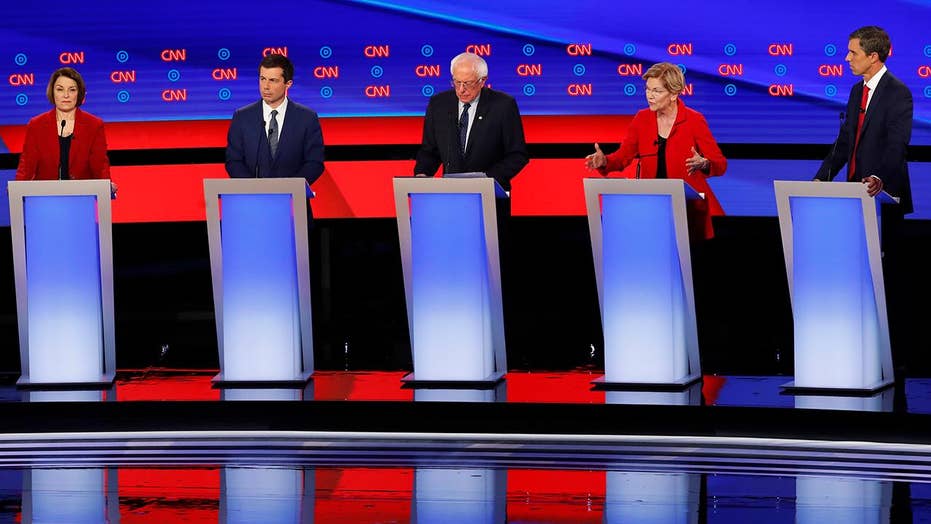 Who are the candidates to watch based off second Democratic debate?

"What the heck is he doing on that stage with those people. It's like that photo... which one of these people doesn't belong in this lineup and it's Delaney now," Huckabee said on "The Ingraham Angle."

WARREN, SANDERS BRACE FOR DEBATE-STAGE ATTACKS ON THEIR 'IMPOSSIBLE PROMISES'

The former Maryland congressman was one of a few center-left candidates who pressed progressive frontrunners Bernie Sanders and Elizabeth Warren over their "Medicare-for-all" and immigration stances.

"You know he's not a Trump fan or anything like that but he's clearly not in sync with the rest of the erratic field or the rest of the Democratic Party," Huckabee said of Delaney.

The 2016 Republican presidential candidate also made a surprising tongue-in-cheek endorsement of underdog candidate and Twitter sensation Marianne Williamson, going so far as to joke that he would 'abandon' President Trump to support her.

"I think I may end up abandoning President Trump this next election cycle. I'm going to stand with Marianne. I mean she captured me tonight. I lit a candle. I stroked a Crystal," Huckabee told host Laura Ingraham.

"I set back in, you know, decided to take a yoga pose and chant and because I could feel the love. I mean this is an interesting stage just telling you that," Huckabee said adding that Williamson "stood out" more than anyone else.