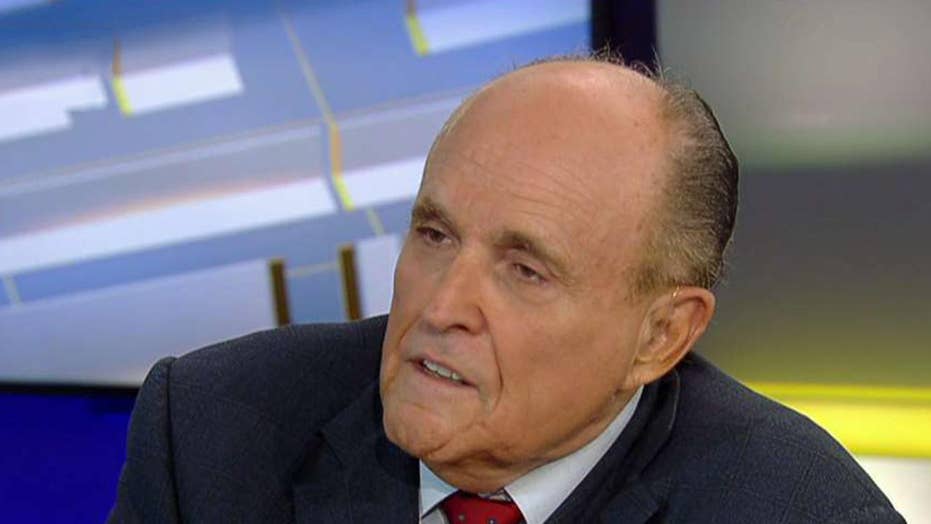 President Trump's personal attorney Rudy Giuliani reveals the next steps in his fight with House Democrats over subpoena.

President Trump’s personal attorney Rudy Giuliani said Tuesday he’s considering individual lawsuits against House Democrats for allegedly violating the constitutional and civil rights of the president and members of his administration amid new congressional inquiries and subpoenas resulting from a whistleblower’s complaint.

Speaking on Fox News' "The Ingraham Angle," Giuliani said he sought the advice of civil rights and constitutional lawyers who recommended such legal action.

The former mayor of New York City suggested that some House Democrats were guilty of violating Article II of the Constitution, which outlines the president’s powers during his four-year term as commander in chief, specifically his power to conduct the foreign policy of the United States. He also said he may sue Democrats in Congress for allegedly violating attorney-client privilege and over obstruction-of-justice claims.

Though still mounting a defense, Giuliani claimed he has evidence, in the form of video recordings and interview notes, which are protected from an additional subpoena under the statute of attorney-client privilege. He said the evidence incriminates House Democrats for allegedly trying to threaten foreign powers into keeping quiet amid the impeachment inquiry.

He pointed to the example of Sen. Chris Murphy, D-Conn., who last month boasted to reporters, including conservative columnist John Solomon, that he told Ukrainian President Volodymyr Zelensky that cooperating with Trump and Giuliani would be viewed as election meddling and would be “disastrous for long-term U.S.-Ukraine relations,” The Hill reported.

Giuliani said Joe Biden and Democrats in Congress are trying to silence him and Attorney General William Barr solely because they are effective in their legal defense of the president. Biden's presidential campaign requested in a letter Sunday that major news networks not invite Giuliani on air anymore, after Giuliani spent the morning on a series of talk shows aggressively highlighting what he called Biden's apparently corrupt dealings in Ukraine and China.

Ingraham mentioned members of Congress are given immunity from prosecution in regard to comments made during legislative sessions. Giuliani said he would come after House Democrats for their remarks made outside of Congress, include Rep. Maxine Waters, D-Calif., who recently tweeted that Trump should be kept in solitary confinement, and another unnamed congressmen who allegedly said Barr should be arrested.

Biden has acknowledged on camera that, when he was vice president, he successfully pressured Ukraine to fire a prosecutor, Viktor Shokin, who was investigating the natural gas firm Burisma Holdings — where his son Hunter Biden had a highly lucrative role on the board paying him tens of thousands of dollars per month, despite limited relevant expertise. The elder Biden threatened to withhold $1 billion in critical U.S. aid if Shokin was not fired.

Fox News' Gregg Re, Brooke Singman and Blake Burman contributed to this report.