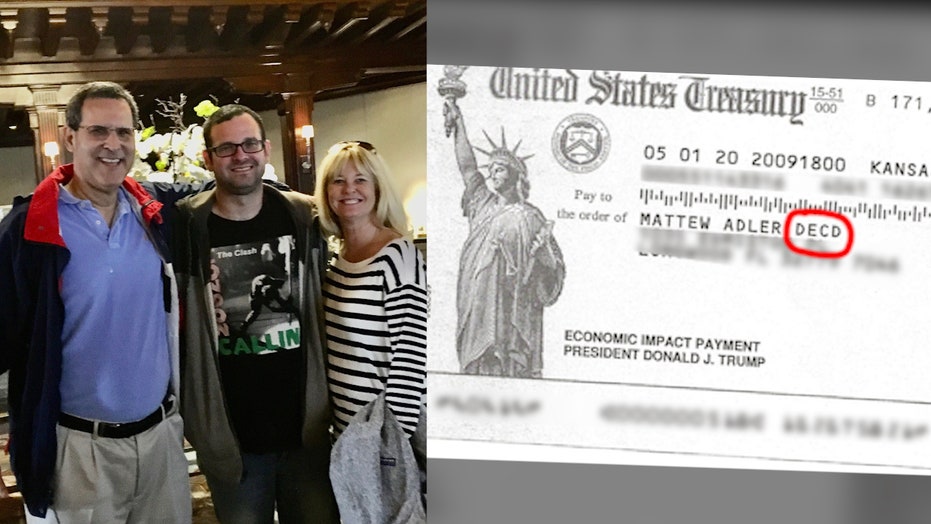 “The thing with grief is that it’s like a wave and it will hit you when you least expect it,” said Adler in an exclusive interview with Fox News. “Over time, the waves of grief will become less frequent, but the wave height doesn't change when you get hit by it. Getting the check in the mail addressed to 'Matthew Adler, deceased' was one of those moments.”

Marshall Adler received this $1,200 federal stimulus payment with his deceased son's name on it. (Marshall Adler)

Some of the more than 130 million economic impact payments that went out to taxpayers as part of the $2.2 trillion economic relief package were sent to deceased taxpayers. President Donald Trump, Treasury Secretary Steven Mnuchin, and the IRS are urging people, like Marshall, to return the money to the government, despite legal experts saying there is no law requiring that people do so. This also marks the first time the IRS has asked for money back from the deceased taxpayers' survivors.

Adler has a different idea for the money. In a letter addressed to President Trump, Adler requested that his son’s $1,200 go to the Dr. Lorna Breen Heroes Fund. Breen was a prominent doctor in New York City who treated coronavirus patients as the medical director of NewYork-Presbyterian Allen Hospital's emergency department. She took her own life on April 26.

“I know Matt would want to help fight the coronavirus [sic] pandemic,” wrote Adler. “Therefore, I am requesting if you could authorize this $1,200 check paid to my son to be donated to the Dr. Lorna Breen Heroes Fund which has been established to provide mental health support to our health care providers."

Breen’s death is exceptionally poignant to Adler because Matthew died by suicide.

“We were very open with our rabbi about Matt’s suicide,” said Adler. “Because to me, it's not how you died. It's how you lived.”

Adler noted that Matthew lived for others, and was even called “the comforter” in grade school because he always consoled classmates with their troubles.

Matthew also emulated his grandparents. His grandfather was a B-24 bombardier in World War II who flew 51 missions, while his grandmother was a nurse at New York’s Bellevue Hospital who bravely cared for smallpox patients during the 1947 outbreak. As life would have it, Adler’s mom died two days after Matthew’s death.

Adler said his family's legacy of courage and giving is what empowered him to fight for the right of families to donate their recovery checks as a tribute to their departed relatives.