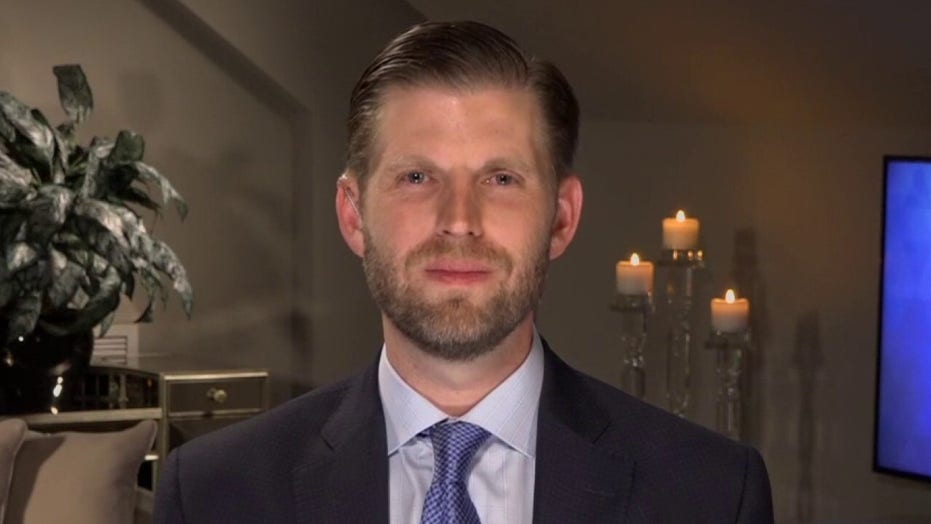 Eric Trump: Democrats trying to milk COVID-19 crisis for everything they can

Eric Trump tells 'Justice with Judge Jeanine' that Democrats have a 'cognizant strategy' to use the coronavirus crisis to derail the president's 2020 campaign.

The Democrats are "trying to milk" the coronavirus pandemic for every election advantage they can get over President Trump, the president's son, Eric Trump, said Saturday night.

"It's sad," Trump told Fox News host Jeanine Pirro on "Justice with Judge Jeanine." "My father as commander-in-chief has one of the hardest decisions I think any president in history has had," regarding whether to reopen the U.S. economy, and to what extent, Trump said.

Trump also ripped Joe Biden, asserting the presumptive Democratic presidential nominee "loves" that he and Trump can't campaign before large crowds during the pandemic -- because Biden thinks it hurts the president.

"Biden loves this. Biden can't go on stage without making some horrible blunder. I mean, even from his basement, he's making awful gaffes every single day. So his campaign is thrilled that he's not going out there," Trump said. "And they think they're taking away Donald Trump's greatest tool, which is being able to go into an arena and fill it with 50,000 people every single time."

"So they will, and you watch, they'll milk it every single day between now and Nov. 3. And guess what? After Nov. 3, coronavirus will magically all of a sudden go away and disappear and everybody will be able to reopen," Trump said. "They're trying to deprive him of his greatest asset, which is the fact that the American people love him. The fact that he's relatable, the fact that he can go out there and draw massive crowds."

"They're actually stoking fear in this country. They're doing a massive disservice. They're being totally disingenuous about the whole thing," Trump said. "But they're doing it for one reason. They want to hurt Trump."