As President Trump prepares to address the U.N. General Assembly this week, a new State Department report shows that the world body is out of sync with U.S. interests in more than two-thirds of votes -- likely raising further concerns within the Trump administration about the organization and America's financial commitment to it.

“The United States continues to be diplomatically isolated on development and Israel-related resolutions,” the report on voting practices at the U.N. in 2018 said.

The State Department made the report public this month, showing that the U.S. and the U.N. General Assembly as a  whole were in alignment just 31 percent of the time in 2018, the same as 2017. This is down from the final year of the Obama administration, when they were in agreement 41 percent of the time.

It means that the U.S. voted against 70 percent of assembly resolutions requiring a vote, more than any other U.N. member state.

The congressionally mandated report for 2018 also reviewed voting by the 15 members of the U.N. Security Council and 193 members of the General Assembly and compared countries' voting records with the U.S. An additional section looked at how the world body votes on Israel.

Former Ambassador to the U.N. Nikki Haley said in 2017 that the U.S. would be “taking names” of countries that vote against U.S. interests, particularly in regard to Israel, while Trump warned that the administration was watching votes -- specifically from those that take U.S. money. 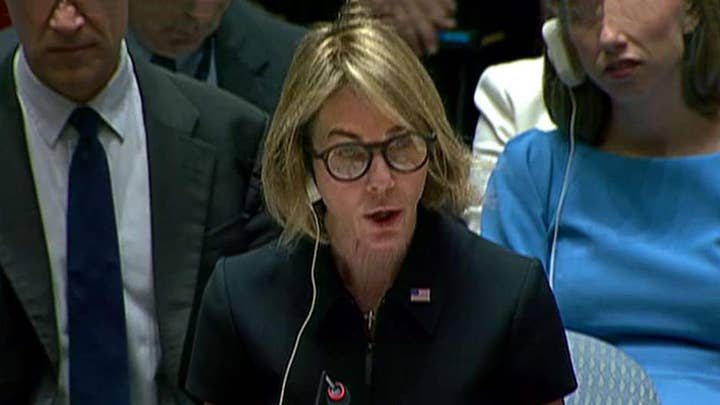 In 2018, Haley noted that the U.S. pays for more than a fifth of the U.N. budget, more than the next three highest donor nations combined. She said at the issuing of the last report on 2017 voting records that “this is not an acceptable return on our investment.”

An analysis by the Council on Foreign Relations found that the U.S. government contributed more than $10 billion to the United Nations in 2017 -- about $7 billion was voluntary and $3.5 billion was assessed.

Since then, the U.S. has pulled out of a number of U.N. institutions including the controversial Human Rights Council and the U.N. Social, Cultural and Economic body (UNESCO). It also yanked funding from the U.N. Palestinian refugee agency.

The report also found that the U.N. General Assembly is largely continuing in its anti-Israel slant, adopting 21 anti-Israel resolutions in 2018, the same amount as 2017. The U.S. supported these resolutions just 14 percent of the time.

It was perhaps with this in mind that new U.N. Ambassador Kelly Craft gave a fiery speech at the U.N. Security Council last week, slamming anti-Israel bias at the body and reasserting U.S. commitment to its ally.

"It is inexcusable that pervasive, anti-Israel bias still exists in the United Nations, and that we continue to witness attempts by some UN Member States to undermine Israel’s standing as a full member of the community of nations," she said. "The United States vigorously opposes all such efforts."

Israel’s Ambassador Danny Danon told Fox News that while anti-Israel bias remains, the “needle is moving” in the right direction and pointed to instances such as the U.S.-sponsored resolution condemning Hamas last year. The resolution garnered a simple majority of support in the chamber but did not gain the two-thirds majority needed to pass.

“The resolution against Hamas, for example, is a notable success because, for the first time, a majority of member states supported condemning the group and labeling it a terrorist organization,” he told Fox News. “And there are many more successes that are taking place outside of GA and UNSC resolutions, but will begin to influence them in the years to come.”

Trump will address the General Assembly on Tuesday, when the issues of both Israel and value for money at the U.N. are likely to be addressed in his speech.