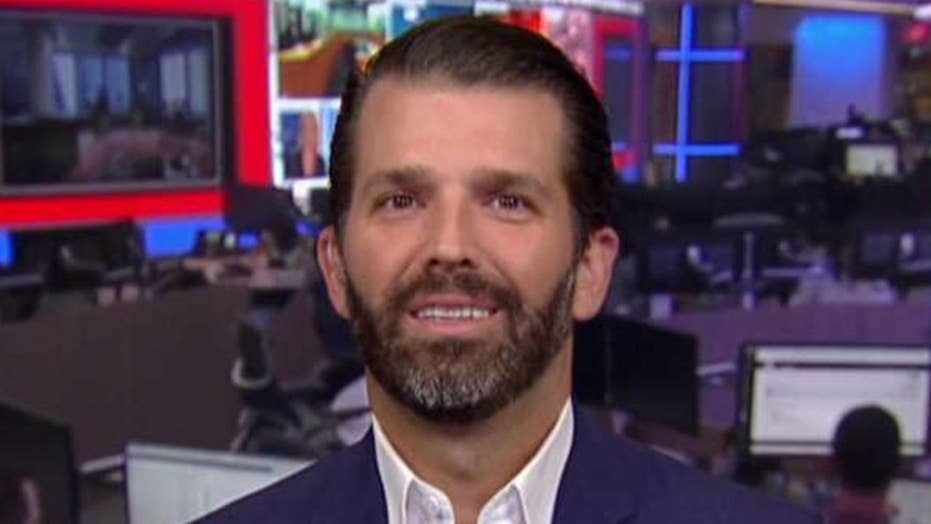 Don Jr.: Media runs with the narrative DNC tells them to

Donald Trump Jr. went into enemy territory on Thursday prepared for a fight, and a fight he got.

During his appearance on the left-leaning daytime chatfest "The View," co-host Joy Behar rattled off a laundry list of President Trump's mishaps and controversial moments when Trump Jr. reminded the panel that "we've all done things that we regret."

The president's oldest son, who was joined on the show by his girlfriend Kimberly Guilfoyle, went on the offensive, accusing "Joy Behar of once using "blackface," and calling out Whoopi Goldberg's past comments diminishing the seriousness of director Roman Polanski's sexual assault of a minor. Then, when the show went to commercial, Trump Jr. took to Twitter to continue the barrage.

“We've all done things that we regret. Joy, you have worn blackface," Trump Jr. said at one point during the contentious segment. "Whoopi, you said that Roman Polanski… it wasn’t 'rape-rape,' when he raped a child."

Goldberg snapped back: “Now that you’ve broken this piece of ice, because I guess it is the fight you wanted…are you questioning my character?”

“I’m not questioning your character. I’m talking about, you’re questioning my father’s character and I say we all have done and said things,” Trump Jr. said before being interrupted by Goldberg.

Behar, an outspoken critic of President Trump, denied wearing blackface. However, Trump Jr. tweeted a 2016 clip showing Behar admitting she wore the offending getup along with a picture of her in the costume. Earlier this year, footage of Behar dressed up as a “beautiful African woman” was resurfaced by TheWrap amid a series of blackface scandals making national headlines.

Trump Jr. did the same for Goldberg, tweeting a link to an article featuring her cringe-worthy quotes about Polanski.

ABC News did not immediately respond to a series of questions, including whether or not Trump Jr. will be invited back on “The View.”

At one point Behar even disciplined the in-studio crowd for applauding Trump Jr.

“Listen, this is not a MAGA rally, OK,” Behar said.

Earlier in the heated interview, Trump Jr. called out ABC News for its role in tracking down the former employee who allegedly leaked a hot mic video that revealed the network killed a damning Jeffrey Epstein story. The panel began the segment by criticizing Trump Jr. for releasing what he believed to be the name of the anonymous whistleblower whose complaint sparked an impeachment inquiry against his father, President Trump.

But the president’s son doesn’t think all whistleblowers are treated equally by the mainstream media.“The View” is part of ABC News, and Trump Jr. bashed the network on which he was appearing.

"ABC is right now chasing down a whistleblower about all of the Epstein stuff because those stories were killed. So, if we're going to have the conversation about the outrage about whistleblowers, you work with CBS to out a whistleblower," Trump Jr. said.

Trump Jr. was referring to a report from HuffPost’s Yashar Ali that indicated ABC News honchos “believe they know the identity” of a former employee with access to the viral footage of Amy Robach venting about the network refusing to air her Epstein reporting.

“Two sources with knowledge of the situation tell me that ABC News executives know who the former employee is but don’t know if that person leaked the footage to Project Veritas, the right-wing activist group, or if they shared it with others who leaked the footage,” Ali wrote. “What ABC News executives do know is that the former employee is now working at CBS News.”

Ali added that ABC executives informed CBS that the potential leaker was now working at "The Tiffany Network."

Less than 24 hours after Ali’s initial story, he followed up with a report that CBS terminated the employee in question.The New York Post has also reported that CBS fired the employee.

Goldberg began the interview by referring to Trump Jr. as “the son of the gentleman in the White House, DJT,” declining to name President Trump or Donald Trump Jr. by name. The move was criticized as “pathetic” by GOP staffer Steve Guest, but it didn’t seem to bother Trump Jr.

“I don't think I've enjoyed an interview this much in my life,” he wrote. “Guess you could say that I just #Triggered The View!!!”