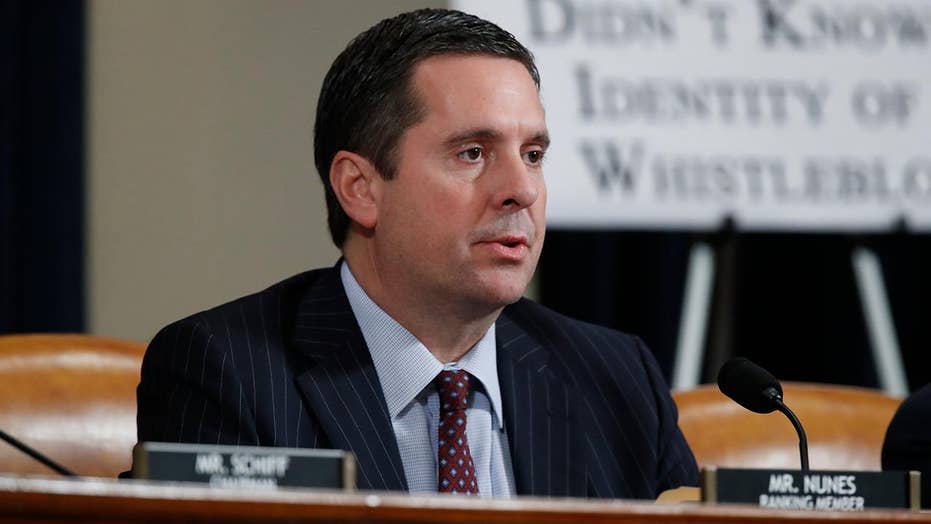 Devin Nunes: Trump had good reason to be wary of Ukrainian election meddling

“It was designed to produce a specific storyline to be pushed forward by the Democrats and their supporters in the media,” Nunes said during his closing remarks in the fifth public impeachment hearing.

REP. MIKE CONAWAY FIGHTS BACK AFTER SCHIFF ACCUSES HIM OF INTERRUPTING WITNESS

Nunes noted that House Speaker Nancy Pelosi, D-Calif., will not sign the United States-Mexico-Canada Agreement (USMCA), a trade deal among those countries that would have “boosted our economy.”

“I hope Mr.Schiff will clarify how much longer will we waste on this effort and what other vital legislation he’s willing to sacrifice for this impeachment crusade.”

“Will there be even more secret depositions accompanied by the usual flood of Democratic leaks?" Nunes said. "Will we have more public hearings with Democratic witnesses but not ours? ...  [The] Minority are in the dark about what this committee will be doing when we return and so is America."

Holmes testified that he eventually understood the investigations to be linked to a delay in $400 million in military aid. The White House countered, as it has in prior hearings, that the witnesses did not speak to any direct knowledge on the aid hold-up, while GOP lawmakers dismissed the alleged offense in question as nothing more than a “thought crime.”

Also during the hearing, former National Security Council aide Fiona Hill clashed with Republicans, accusing some lawmakers of embracing the “fictional narrative” that only Ukraine -- and not Russia -- interfered in the 2016 elections.