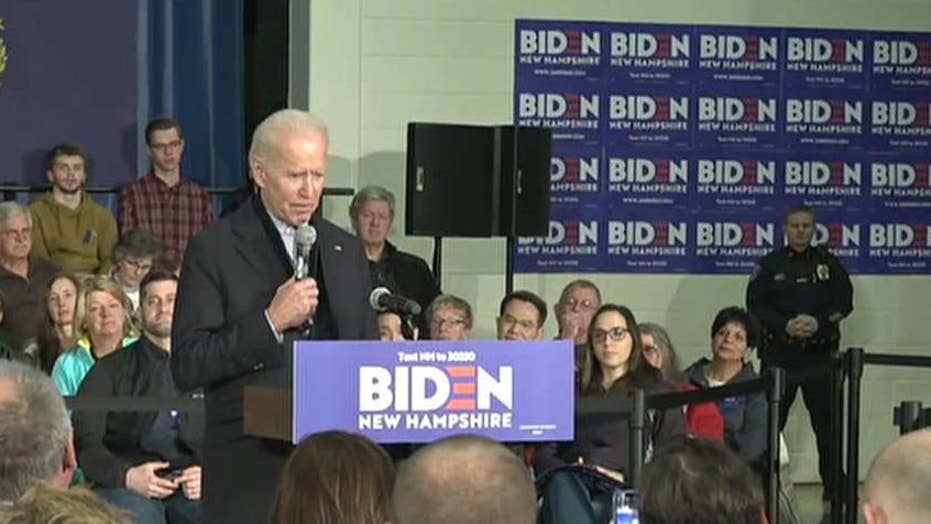 2020 White House hopeful Joe Biden is shouted at by protesters at a New Hampshire campaign event; Ellison Barber reports from the campaign trail.

In a rare moment from the anti-Trump cable networks, CNN anchor Jake Tapper acknowledged over the weekend that Hunter Biden's lucrative work in Ukraine without relevant expertise "does stink."

On Sunday's "State of the Union," Tapper spoke with Rep. Joe Kennedy III, D-Mass., about the pending Senate impeachment trial of President Trump and former Vice President Joe Biden's shift in rhetoric on whether he would cooperate with subpoenas to testify. Kennedy expressed confidence that Biden would cooperate but stressed that there was "no credible allegation" that he had done anything wrong regarding his son's employment with Burisma Holdings in Ukraine.

However, even Tapper drew attention to the suspicious arrangements the Bidens had with Ukraine.

"You know, it's true that there's no evidence of any wrongdoing by Vice President Biden or that Hunter Biden broke any laws at all, but frankly, it does stink that Hunter Biden got this contract with no expertise in the energy sector and that he likely -- he's already said it, basically -- that he got that money, which was significant because of his connection with his father, the vice president at the time, who was also in charge of Ukraine at the time," Tapper said. "Do you think that future presidents and vice presidents should say, 'My relatives cannot cash in, in any way, on their connection to me?'"

"Look, I think it is certainly worth putting that out there and worth trying to make sure that there is not any sort of profit that is going to be earned by close relatives being in office. I've had plenty of family members in office. I understand the responsibility," Kennedy responded. "I do think that, though... it's awfully hard for me to reconcile and to square those comments and that clarity put forward by Vice President Biden, by Hunter Biden, with the fact that you've got the current president's children running around on an international hotel chain that is being supported by U.S. military service members staying at their hotels across the world, where they tried to host the G-7 summit at a struggling hotel in Florida and where his daughter, who runs clothing lines and jewelry lines, just got patents from China in the midst of a trade war.

Kennedy continued, "Some of those might be legitimate, some of them might not be, but let's be clear and make sure that everybody's held to the same standard. And, once again, I just don't think that's the case here."

Trump, in a tweet this past October, backed down on his proposal to hold an upcoming G-7 summit at his personal resort in Doral, Florida, blaming "both Media & Democrat Crazed and Irrational Hostility."

Meanwhile, Hunter Biden's attorneys strongly denied a private investigation firm's claim that he was involved in a massive, $156 million "counterfeiting scheme." The legal team called the effort another obviously bogus "scheme" for attention.

Fox News' Morgan Phillips and Gregg Re contributed to this report.