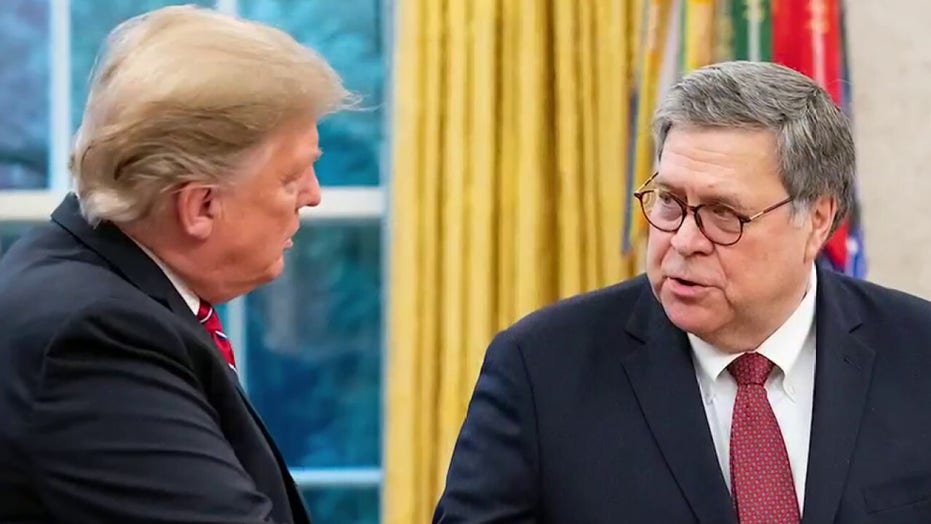 Attorney General Bill Barr told ABC News on Thursday that the President Trump’s tweets "make it impossible for me to do my job," in an out-of-character jab at the president – but critics on the left have dismissed the comment as a calculated move.

Barr said he was ready for blowback from Trump for his comments and was focusing only on doing his job. South Carolina GOP. Sen. Lindsey Graham quickly tweeted support for Barr, saying Barr has his "complete confidence" and that the president did "a great service" to the DOJ and the "nation as a whole" by appointing Barr.

The attorney general also made it clear to ABC News that Trump "has never asked me to do anything in a criminal case.” White House press secretary Stephanie Grisham said Trump "wasn’t bothered" by Barr's remarks.

Senate Majority Leader Mitch McConnell also sided with Barr but liberal critics of the president think it’s a little too convenient that everyone is playing nice when Trump historically attacks anyone who critiques him.

New York Times columnist David Leonhardt asked if Barr’s comment was “just a performance” in a piece published Friday. Leonhardt said there are “two plausible explanations for William Barr’s surprising criticism of President Trump,” the first being the literal one.

“The second explanation is the performative one. Barr criticized Trump, perhaps even with Trump’s approval, to shore up the Justice Department’s credibility as an independent agency that makes decisions based on the law, not the president’s whims. In this scenario, Barr is happy to use the Justice Department to help Trump but would prefer the help to be less obvious,” Leonhardt wrote. “Which is the right interpretation? It’s impossible to know right now.”

The Times columnist added that “many of Trump’s critics reacted to Barr’s statement last night with deep cynicism,” while Mediaite declared “lots of political observers detected a distinct lack of sincerity in Barr’s supposed ‘complaint.’”

CNN host Chris Cuomo called Barr’s comment a “whack at the boss” on “Cuomo Prime Time” before diving into his conspiracy theory.

“Really? What a smack,” Cuomo smirked. “Such defiance, such that, I have to suspect that punch is a ploy. Distract the media with the drama while ignoring the fact that the explanation from Barr about how it happened here with [Roger] Stone.”

Cuomo said “another clue” that the comment was a “canard” is that Trump “let the disrespect go.”

Washington Post columnist Jennifer Rubin seemed to think Barr was sincere but called his comment an “outburst” that “means little if he does not actually stand up to Trump” before quoting “unimpressed” former prosecutor Mimi Rocah.

“Barr is covering. He’s saying that Trump tweeting explicitly is making it hard for him to do his job and clearly, based on his actions, he views his job as giving favorable treatment to someone who Trump wants to protect both because he’s his friend and because he could provide more damaging information about the Trump-Russia connection if he were truthful,” Rocah said in a tweet highlighted by Rubin.