Biden admin has no ‘believable explanation’ for its ‘various disasters’: Newt Gingrich

After pointing to the border crisis, crime surge in America's major cities, and increased gasoline prices, Fox News contributor Newt Gingrich told "Fox & Friends" on Monday that the Biden administration has no believable explanation for the "various disasters" it's induced — and that it will have an impact on the upcoming 2022 midterm elections.

NEWT GINGRICH:  …the problem for the Biden presidency is that they have no believable explanation for the various disasters, whether it’s the millions of crossing the southern border, it’s the rise in the crime rate, it’s the difficulty with education, or the two things that are going to ultimately, I think, defeat the Democrats this fall: The price of food, and the price of gasoline. Food is actually going to be a bigger issue than gasoline. There is an enormous worldwide food problem created in part by what’s happening in Ukraine which was the fourth-largest food exporter in the world. The food agricultural organization just released a statement that this is the highest price of food in history and that their index indicates millions are going to be starving in much of the world and, America, they are just going to be at great pain. And they are going to say Joe Biden did this… I think the theme is going to be ‘we can’t afford it:’ We can’t afford the gasoline price. We can’t afford the heating oil price. We can’t afford the price of chickens. I mean, just go down the list. 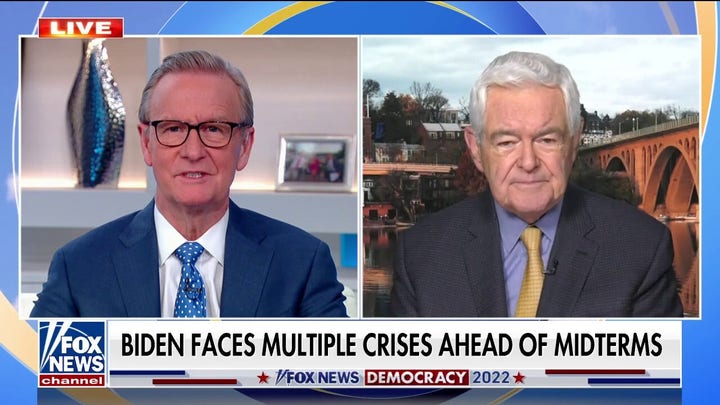