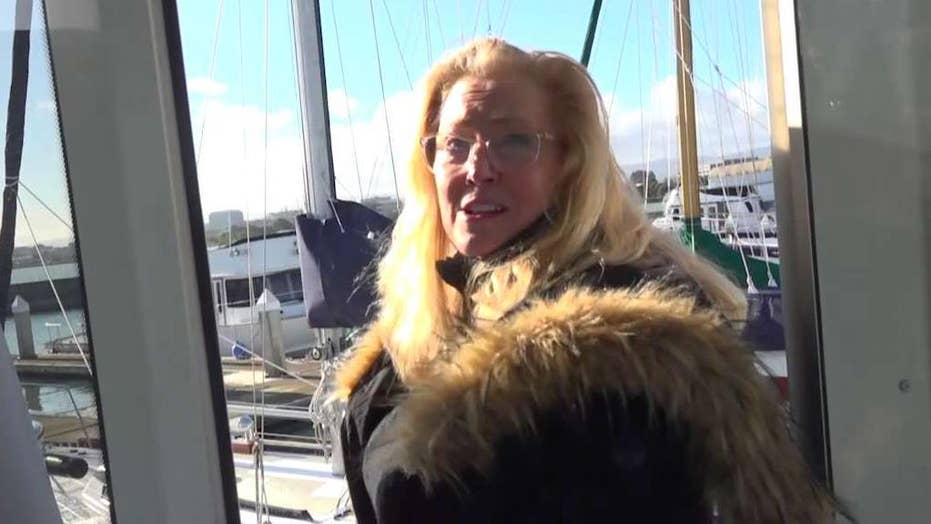 For the last four years, San Francisco native Nyna Armstrong has lived on a boat in the Bay.

Editor's note: This report is a summary of Part 4 of a 'Tucker Carlson Tonight' investigation -- the full segment is available above.

Housing prices in San Francisco are so high that some middle-class residents are taking drastic measures to stay in the area, while others have decided to pack up and leave altogether.

“I can't afford a place in San Francisco,” says Nyna Armstrong, who has spent the past four years living on a boat in San Francisco Bay. “Trying to rent an apartment in the Bay Area is just tremendously expensive."

According to the real estate website Zillow, the median home price in San Francisco is more than $1.3 million, up from $837,000 in 2012. The median rent is $4,312 per month. Both figures are higher than their Manhattan equivalents.

“You pay a million dollars for a condo and you still have to pay homeowner's association dues of hundreds of dollars a month,” says Armstrong, who was featured in the fourth installment of Tucker Carlson Tonight’s “American Dystopia” series. “A boat of this size is about a quarter-million dollars."

One reason for San Francisco's high cost of living is its booming tech sector. The city has more billionaires per capita than any other city in the world, according to a study by Wealth-X, which tracks the world’s wealthiest people.

Foreign buyers have also played a role in driving up housing costs in California by making cash purchases, often above asking prices.  Chinese nationals are the top foreign buyers in the United States, according to a study by the National Association of Realtors.

The situation is dire for middle-class residents like Armstrong, who has a degree in electrical engineering and works at a Silicon Valley tech company. A family of four earning $117,000 a year is considered “low income” in  San Francisco, according to the federal government.

“Most people only stay here because we're employed,” says Armstrong.  “I mean, I love my job. I love the company I work for. I love the people I work with. And that's the only thing keeping me here.”

FLASHBACK: SOME SAN FRANCISCANS NOW LIVING ON THE BAY AS HOUSING CRUNCH SENDS THEM TO BOATS, BARGES

More than 40 percent of Bay Area residents say they are “likely” to move out of the area in the next few years, according to a poll commissioned by the Bay Area News Group and Silicon Valley Leadership Group. Two-thirds of respondents said that the area's quality of life has gotten worse over the past five years.

After more than a decade of expansion, San Francisco is now experiencing anemic population growth. The city lost 5,288 residents to domestic migration between July 2018 and July 2019, according to the California Department of Finance.  Most were of them were replaced by 5,200 immigrants who moved to the city. More alarmingly, the city's own statistics show its population of drug addicts is greater than the number of high school students.

Armstrong, a mother of two adult daughters, says she thinks about leaving “every day.” Many San Francisco families have already done so.

“The crime is just terrible," she says. "All of our cars have always been broken into if we go into the city. The filth in the city is terrible. It's just it's oppressive."

She gets away from it all in her home (literally) on the water.

“It's just like a nice neighborhood," Armstrong says, "except everybody's on a boat."