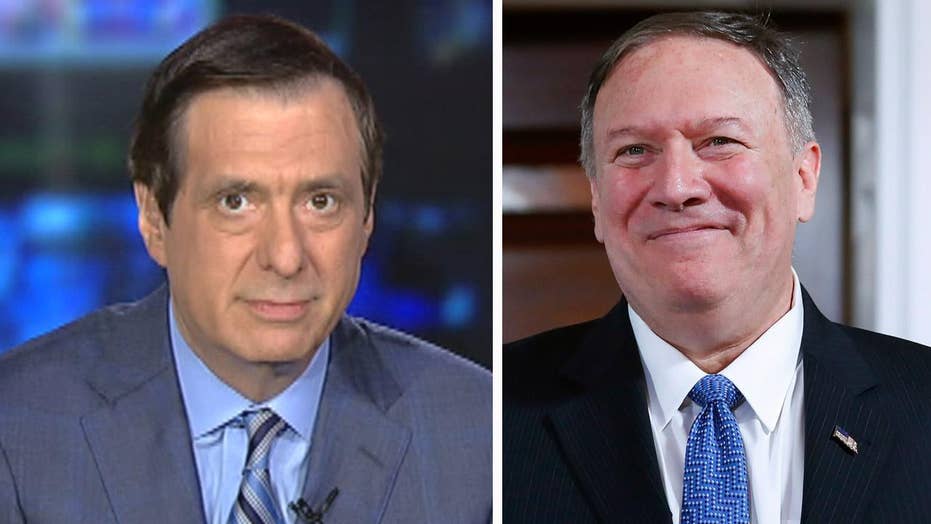 Howard Kurtz: Does it matter that Pompeo was on Trump’s Ukraine call?

President Trump, now sounding a cautionary note about “civil war,” is obviously at the white-hot center of the impeachment drama, just as he’s been at the center of American political and cultural warfare for four years.

But others in his inner circle are now being pulled, almost by magnetic force, onto the battlefield.

Mike Pompeo is the latest the find himself in the line of fire, in the wake of a Wall Street Journal story and other revelations.

The secretary of state hit back hard yesterday, tweeting that House Democrats are trying to “bully” and “intimidate” the State Department with deposition demands and he “will not tolerate such tactics.”

IS IMPEACHMENT AN ELITIST MOVE THAT SHIFTS POWER FROM THE VOTERS?

The Journal’s lead story said Pompeo was among the officials who listened in on Trump’s now-famous July 25 call with Ukraine’s leader, in which the president asked for help in investigating Joe Biden and his son.

Television has had a field day replaying a Pompeo interview with ABC’s Martha Raddatz, who asked him point-blank, “What do you know about these conversations?”

Pompeo haltingly evaded the question: “So, you just gave me a report about an IC whistle-blower complaint, none of which I’ve seen.” When she followed up with “you say you know nothing about this,” Pompeo said he thought he saw a statement from the Ukrainian foreign minister that there was no pressure from Trump on the call.

So the secretary obviously knew all about the call and studiously tried to avoid saying so on “This Week.”

William Barr has also been pulled deeper into the drama. The attorney general was already been reported to have been surprised and angry that the president told Volodymyr Zelensky on the call to work with him on further investigation.

Barr is, therefore, a crucial partner as Trump uses “federal law enforcement powers to aid his political prospects, settle scores with his perceived ‘deep state’ enemies and show that the Mueller investigation had corrupt, partisan origins,” says the Times.

Still, there’s video of Trump saying he wanted Barr to aid in the probe of the origins of the Russia investigation, so this was not a state secret.

The third major player now is Rudy Giuliani, who is taking issue with House subpoenas “signed only by Democrat Chairs.” (That is routine, as it was when Republican House chairmen signed subpoenas during the Benghazi probe.)

Giuliani, of course, has been a near-daily presence on television, defending his role in privately meeting with Ukrainian officials and doggedly trying to shift the spotlight to allegations of wrongdoing by Joe Biden and Hunter Biden.

Giuliani’s combative interviews prompted the Biden campaign to ask the networks to stop putting him on and allowing him to spew lies. This was a Hail Mary pass that would obviously be swatted down, and an effort to generate some anti-Rudy headlines.

Not only would no network let a campaign dictate its bookings, but numerous anchors have aggressively challenged Giuliani on the air. In fact, some Democrats like Rudy on television because they think his sometimes heated style hurts Trump.

In a separate story, the Journal reports that Barr at times has been critical of Giuliani’s efforts, and that Trump, while appreciating his TV combat role, has occasionally mocked his personal lawyer.

Of course, there are also Democrats who have been given starring roles in the impeachment drama. One is Nancy Pelosi, who was just on “60 Minutes,” and has been saying she’s “sad” and “heartbroken” over impeachment in an attempt to tone down the rhetoric.

Another is Adam Schiff, the House Intel chairman, who made the mistake of exaggerating Trump’s Ukraine call in a hearing during what he now calls mockery. Trump has repeatedly questioned on Twitter why Schiff hasn’t been questioned for fraud and treason. (Treason?)

And, of course, the Bidens. Tucker Carlson’s show obtained a 2014 photo of the then-vice president and his son playing golf in the Hamptons with a board member of the Ukrainian gas giant that employed Hunter Biden. This obviously raises questions about Joe Biden’s contention that he did nothing to help his son in Ukraine and that they never discussed the matter.

Finally, there’s the unknown whistle-blower, who Trump has accused of sparking a “Democratic hoax” and whose lawyer says his life may be in jeopardy.

By setting their sights on two Trump Cabinet members and his lawyer, House Democrats have given themselves more targets. But they also risk muddying the narrative and allowing these Trump confidants to delay the investigation into next year’s campaign.