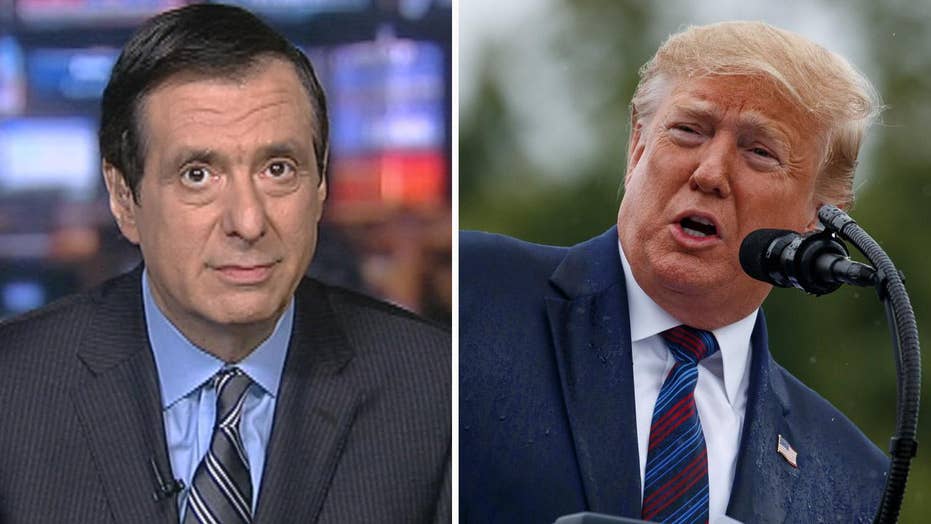 Howard Kurtz: Some fierce Trump critics tell Dems to win it at the ballot box

'MediaBuzz' host Howard Kurtz weighs in on David Brooks' commentary that impeachment is an 'elitist' tactic and the whole country should be able to vote on keeping or removing the president in November 2020.

The Democratic impeachment drive is obviously gaining momentum, and it’s hard to see how the “inquiry” won’t lead to a one-party vote to remove Donald Trump from office.

This has further polarized an already divided country, with the president speaking of “civil war,” calling the media more corrupt than the Bidens and questioning whether Adam Schiff should be arrested for “treason” over his comments at a hearing. Meanwhile, the whistle-blower’s lawyer says his life may be in danger and there’s an online push to identify him, even as the president says he wants to meet the CIA officer who was guaranteed anonymity under the law.

Things are getting ugly, and we haven’t even had the first hearing (because the House refused to interrupt a two-week vacation after declaring Trump a threat to democracy). Nancy Pelosi, concerned that Democrats are appearing overly eager, says she is “heartbroken” during this “sad” time for our country.

But even some of Trump’s harshest critics are starting to say that impeachment is a lousy idea. It’s not based on some lofty notion of bringing the country together. No, it’s an argument that the Democrats are making a spectacularly bad judgment that increases the chances their nemesis will remain in office.

David Brooks, the moderately conservative New York Times columnist, has denounced Trump in harshly personal terms from the beginning. He contends in the very first sentence that Donald Trump committed an impeachable offense in raising Joe Biden and Democratic hacking with Ukraine’s president.

But, he says, that doesn’t mean the House has to impeach him.

Brooks’ opening bid is the most obvious one: impeachment won’t work. It would take 20 Republican defections for the Senate to convict Trump, that’s not going to happen, and he’ll declare himself vindicated.

But here’s the intriguing part: “This is completely elitist. We’re in the middle of an election campaign. If Democrats proceed with the impeachment process, it will happen amid candidate debates, primaries and caucuses.

With the Nixon and Clinton impeachment efforts, both presidents were in their second term; there was no other way to remove them. But Trump faces the voters in a little over a year. If the Democratic nominee beats him, that person has a mandate. But a successful impeachment overturns the last election, and for a reason—the Ukraine call—that roughly half the country will never accept.

There’s more. As I’ve argued, impeachment is such a dominant story that it drains the oxygen from most Democratic candidates (with the obvious exception of Biden). “There’s only so much airtime and people are getting tired of the campaign,” analyst Larry Sabato told me Sunday on “Media Buzz.”

Brooks also makes the case that impeachment shifts the case onto Trump’s turf. “He’s good at one thing: waging reality TV personality wars against coastal elites,” the columnist writes. “So now over the next few months he gets to have a personality war against Nancy Pelosi and Jerrold Nadler.”

Support for an impeachment inquiry is ticking up in the polls, but the fallout will be substantial. Pelosi held out for months, saying any impeachment had to be bipartisan. That hasn’t happened, so now, bowing to her progressive wing, the speaker says she only insisted they should try to be bipartisan.

It would be ironic if in their zeal for impeachment, the Democrats wound up forfeiting their chance to get rid of a president the old-fashioned way.