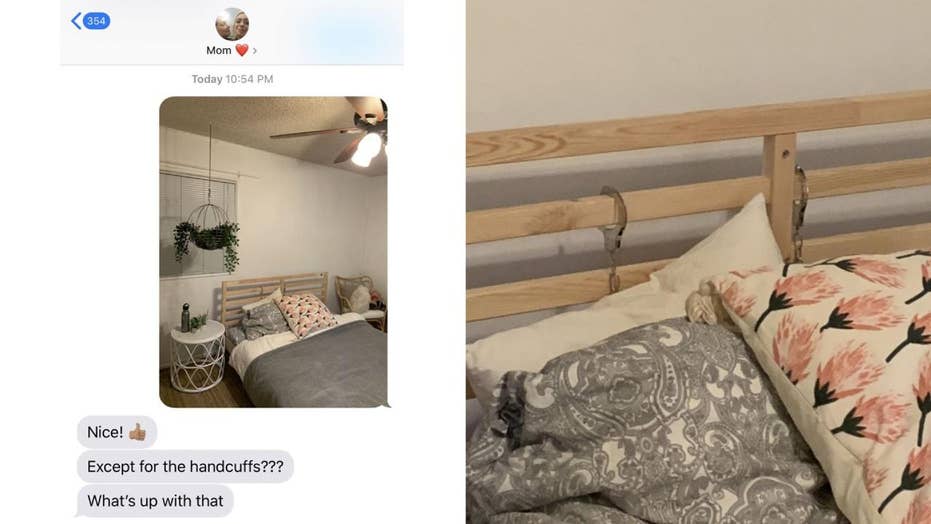 One bawdy detail leaves a California mom asking ‘What’s up with that’ after seeing a picture of her daughter's new bedroom.

A picture is worth a thousand words — or, for this eagle-eyed mom, a thousand questions.

A college student from Orange, Calif., recently texted a picture of her new bedroom to her mother, who had reportedly been asking to see it for a while. Unfortunately, she forgot to remove a specific item on her headboard — one she preferred her mother not see.

“Moms been asking for pics of my new room…finally sent one…I’m so stupid,” the woman shared in a tweet, which showed the conversation with her mother alongside the picture she sent.

One mom was quick to notice something out of the ordinary when her daughter sent her a picture of her new room. (Twitter)

Though the picture – which showed a hanging planter, nightstand, bed and chair – seemed innocuous, the woman’s mother was quick to zero in on something out of place.

“Nice,” her mom replies at first, along with a thumb’s up emoji. However, she then follows-up with, “Except for the handcuffs???” And sends a final text asking, “What’s up with that[?]”

Though the student tried to cover up the embarrassing item by claiming it was for a “short film” her roommate was filming, she said her mom didn't believe it — and neither did Twitter, where the text exchange has received over 110K likes.

She told her mom she would remove them, but that did not stop the Twitterverse from cringing at the mistake.

"Always triple-check your work before submitting," another said.

Though embarrassing, the student seemed to take it all in stride.