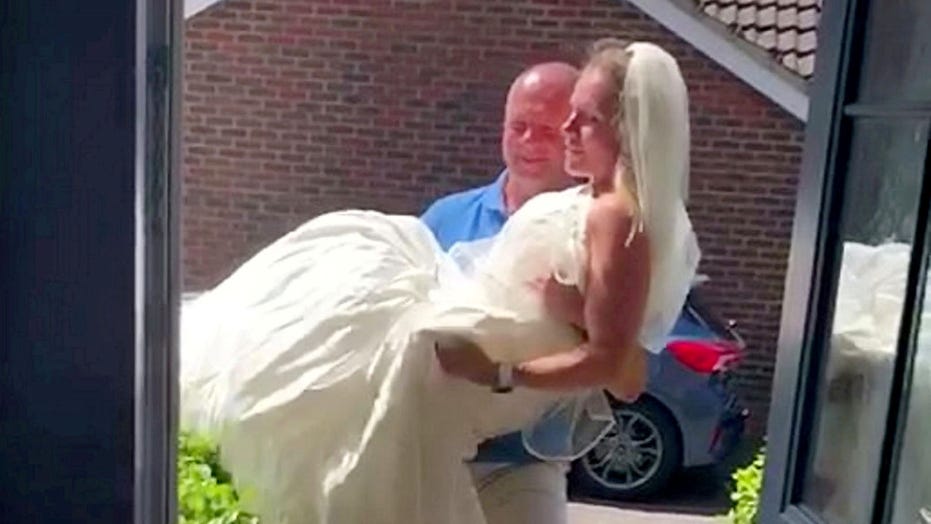 A bride who was too heavy to be carried over the threshold has shed 112 pounds and finally realized her dream -- 18 years after her wedding.

When Steph Gill wed almost two decades ago weighing 252 pounds, her husband John simply could not lift her into married life. After peaking at 308 pounds, Steph had a gastric bypass and took up running and now weighs just 140 pounds.

To mark the couple's wedding anniversary, Steph donned her old wedding dress and John proudly carried her through their front door as family and friends watched on. (SWNS)

To mark the couple's wedding anniversary, Steph donned her old wedding dress and John proudly carried her through their front door as family and friends watched on.

The mum-of-two said: "Finally, after 18 years John was able to carry me over the threshold. So it was only right that I dressed appropriately, even though the dress was five sizes too big.

The IT manager had long dreamt of being carried into married life, but her weight made it impossible when she married John aged 22 in a quaint Kent church.

She said: “It certainly was in my mind. But I knew there was just no way he could carry me at my previous weight. I was a size 20 and weighed 252 pounds. I would have been upset that others were able to do it but we couldn’t.”

The IT manager had long dreamt of being carried into married life, but her weight made it impossible when she married John aged 22 in a quaint Kent church. (SWNS)

When Steph had her gall bladder removed in 2015 the consultant suggested she would benefit from weight-loss surgery. She was referred to King's College Hospital in London, and having been part of a weight-loss management programme, medics there agreed to take her on. They removed 80 percent of her stomach.

Steph said: “Some people think it is a quick fix but it requires a change in lifestyle. You have to want to keep the weight off.”

Determined to stabilise her weight, Steph enrolled on a ‘couch to 5K’ programme with her local running club - Beginners2Runners. She has since completed several half-marathons and has maintained her current weight of 140 pounds for more than a year. During lockdown John, 47, happened to pick Steph up and she realised that her dream of being carried across the threshold was finally possible.

Steph said: “I can’t remember why lifted me up, but I just said ‘oh my God, you can pick me up.’ That’s how the idea came about."

Instead of doing it straight away, the couple agreed to wait until their anniversary last week.

Steph, who is currently managing IT for key workers in lockdown, said: "John knew I'd always wanted to be carried over the threshold so he agreed to do it. But he didn't realise I was going to wear my wedding dress until the last minute. I was really nervous in case it had turned yellow. I hadn't seen it since I packed it away in its box 18 years ago.”

The couples’ parents, children and neighbours gathered around to watch as the long-awaited spectacle unfolded. Their “emotional” nine-year-old son watched excitedly as their 16-year-old daughter filmed the event.

Steph said: “John was proud that he could do it and he always says how proud he is of me for all the weight I’ve lost. Given all the attention it has raised, I think he regrets not wearing a suit. It was just too hot. It really lifted people’s spirits during the lockdown. It was also quite funny seeing someone walking around our little close in a wedding dress. It is not something you see every day."

Running has been crucial for Steph’s weight loss. She has ran several half marathons since joining her local club and was due to run in the Greater Manchester Marathon in April before it was cancelled due to lockdown.

She added: “Running is brilliant for physical and mental health. I wanted to pick a sport which I couldn’t make excuses to avoid. You can run whenever, so it’s great for that.”

Since losing weight, Steph is much happier with her life and wants to encourage others to seek help if they want to do the same.

She said: “Being overweight has mental as well as physical effects. It feels so good to be in shape. I would encourage anyone to seek help. It might be harder to reach now, but it is still out there.”

The key worker stressed that bypass surgery is not an easy weight-loss option and should be combined with a change of habits.

She added: “Some people think it is a quick fix, but it requires a change in lifestyle. Many people pile the weight back on quickly. You really have to want to keep the weight off.”