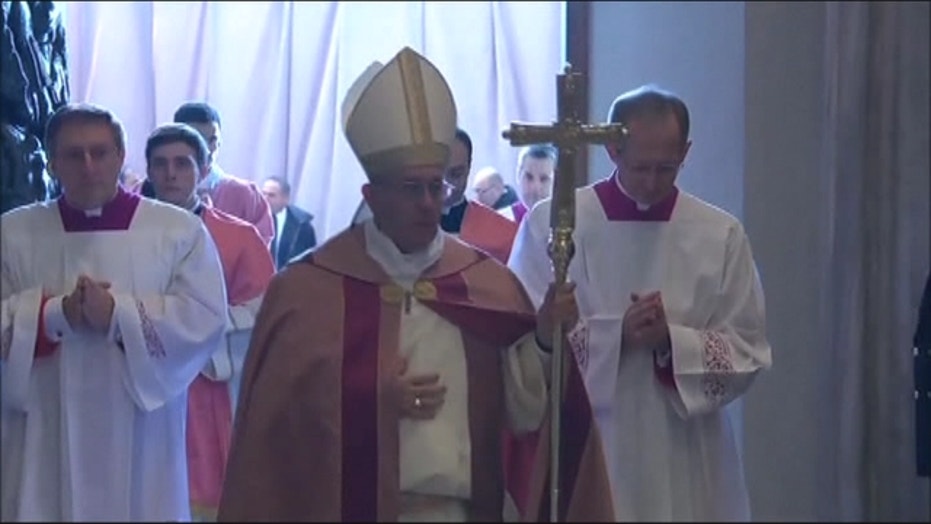 Pilgrims will flock to the border to hear the Pope

Hundreds of thousands of pilgrims will flock to the border to hear him speak, and America's political class will likely be listening as well.

REYNOSA, Mexico (AP) – The young Salvadoran woman was robbed and forced to dodge kidnappers working for a drug cartel during her four-month odyssey to this border city of belching factories and swirling dust across the Rio Grande from Texas.

She hoped to be on the other side long before Pope Francis visits the region next month and delivers what promises to be a highly symbolic homily addressing immigration. Hundreds of thousands of pilgrims will flock to the border to hear him speak, and America's political class will likely be listening as well. Francis' Feb. 17 Mass in Ciudad Juárez comes just eight days after the New Hampshire primaries, and three before contests in South Carolina and Nevada.

Immigration has been a hot-button campaign issue particularly among Republican hopefuls such as Donald Trump and Ted Cruz, who have taken an increasingly hard line with Trump vowing to deport the more than 11 million immigrants living in the country illegally and Cruz aiming to end birthright citizenship for their U.S.-born children. It is also an issue close to Francis' heart, and while analysts doubt he will wade too blatantly into the political thicket, his very presence along the border speaking on the issue will turn heads.

"Migration is a complicated situation and he's not going to ignore the demands of national sovereignty ... (but) he's calling for a more open and generous approach," said Tom Quigley, former Latin America policy adviser for the U.S. Conference of Catholic Bishops. "You can't assume that he's going to say 'You all come,' but he will clearly be urging the United States government, implicitly at least, to find ways of addressing the reasons why people are leaving El Salvador and Honduras and other countries."

For the Salvadoran woman, who gave only her last name, Miranda, all the talk makes little difference to her plans. She said she was not even aware the Pope was coming, and nothing Trump or the other candidates say can dissuade her from seeking a better life.

Back home in El Salvador — which last year recorded a homicide rate of 103 per 100,000 inhabitants, believed to be the highest of any country not in open war — she faced death threats from hyper-violent gangs that rule entire neighborhoods largely unchallenged.

"It does not make you want to go less," Miranda said of the rhetoric, "because you know that immigration is never going to stop."

Violence is also rampant in neighboring Guatemala and Honduras, the latter of which had been the world's reigning murder capital in recent years. Gangs in all three countries kill with impunity, extort broad swaths of the population and recruit young people so aggressively that some stop attending school or even leaving home.

Living in many parts of those countries "is like living in a dark, dangerous, dead-end alley, and migration is a dark, dangerous tunnel — but it's a tunnel," said Kay Andrade Eekhoff, who works for Catholic Relief Services in El Salvador overseeing programs for at-risk Central American youth.

Statistics show that many continue to risk the tunnel, despite a surge in enforcement by the U.S. and by Mexico along its own southern frontier. U.S. Customs and Border Protection says apprehensions of unaccompanied children mostly from Central America totaled 17,370 in October-December. That was up 117 percent from the same period a year earlier, while apprehensions of families rose 187 percent. Still, total detentions remain well below historic highs.

Immigration and Customs Enforcement agents on Jan. 2 began rounding up Central American immigrants who entered without permission since May 2014.

Earlier this month Secretary of State John Kerry announced an expansion of a program letting Central Americans apply for refugee status before traveling north. But some say they may not qualify, or it's simply too dangerous to wait.

Those in a hurry include a 20-year-old man in San Salvador who was deported from the U.S. just months ago. On his last trip north, last summer, the Gulf drug cartel kidnapped and held him in Reynosa for five weeks until his family scraped together ransom. U.S. border agents later captured and sent him home. A police officer's son, he's now planning to try again after getting gang threats.

"They told me if I did not join them, something was going to happen to me or my dad," the man said, speaking on condition of anonymity for fear of gang reprisals.

Francis has made the plight of migrants one of the hallmarks of his papacy, denouncing what he called the "globalization of indifference" toward people desperate to flee poverty and persecution. He has taken his message of compassion to Lampedusa, Italy, destination for many African migrants, and to the European Union and the United Nations.

Last fall in the U.S. Congress, Francis lectured lawmakers that "we must not be taken aback by (migrants') numbers but rather view them as persons." He reminded them that they, too, descended from immigrants drawn by the dream of a new future.

In Ciudad Juárez, the Argentine-born Francis plans to celebrate Mass in a huge open field on the border and then walk to the Rio Grande to salute people on the other side in a powerful show of solidarity with his Latin American compatriots. Vatican officials say he intends to address violence and drug trafficking as well. Francis will also come close to fulfilling his wish to cross the border during the U.S. visit, something that was ultimately scrapped for logistical reasons.

It's a message that resonates with Sister Norma Pimentel, director of Catholic Charities of the Rio Grande Valley.

"They are people and we need to treat them that way," said Pimentel, whose work Francis has praised and who was invited to meet him in New York last year. "They need our help, and so we welcome them to restore their dignity."

Pimentel's center at the Sacred Heart church in McAllen receives about 100 migrants a day who have been detained, processed and released by the Border Patrol. Each adult gets an electronic monitoring anklet to ensure they make court appearances.

On a recent morning, Erica Johana García was breakfasting with her two children at the center before catching a bus for the final leg of their journey to Los Angeles. They left Guatemala after thugs told her 15-year-old son they would rape his 8-year-old sister if he didn't join their gang.

"I can't go back because I risk my children," she said, "especially my son."