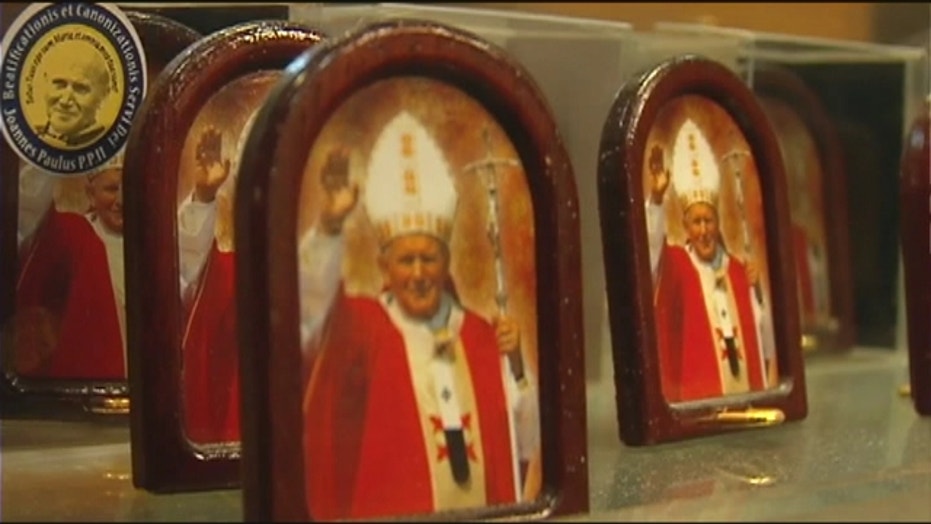 Just like Pope Benedict XVI, the next pope will largely be overshadowed by Pope John Paul II's looming legacy.

To some Latinos, he is the most beloved pontiff of the 20th century because he used his powerful pulpit to support immigrants and oppressed war-torn nations.

But others take a darker view, criticizing him for his failure to respond aggressively to one of the worst crisis in the recent history of the church – the sexual abuse scandal – and for failing to back grass roots movements in Latin America fighting repression.

The canonization on Sunday of Pope John Paul II, the magnetic Catholic leader who sparked impassioned feelings, has stirred an array of reactions among Catholics in the United States.

Elected to the papacy in 1978, Pope John Paul II was the longest serving leader of the Roman Catholic Church in the 20th century and earned a canonization quicker than any other pontiff, leading many in the church to ardently defend him against attacks by some scholars and critics.

“That is going to be the judgment of history looking at his papacy with a longer lens,” the Rev. David Garcia, the director of the Old Spanish Missions at the Archdiocese of San Antonio told Fox News Latino of the late pope’s legacy. “We’re still too close to this issue.”

Garcia and other clergymen mentioned Pope John Paul II’s frequent trips to Latin America – especially Mexico – and his devotion to the Virgin Mary as one reason why many Latinos in the U.S. feel such a strong connection to him. Outside of his trips to his home country of Poland – along with France and the U.S. – Pope John Paul II visited Mexico more than any other country in the world and, in 1999, declared the Virgin of Guadalupe to be the patroness of the Americas.

“It was widely known that Mexico was one of his favorite countries,” Garcia said. “And his devotion to the Virgin of Guadalupe endeared him to not only Mexicans, but also the large Mexican-American population living in the U.S.”

During his time at the helm of the Vatican, immigration in the U.S. was not the hot-button political issue it is today, but Pope John Paul II made a concerted effort to speak out against the exploitation of undocumented immigrants – even while saying that illegal immigration is something that needs to be stopped. Much like his stance toward refugees from war-torn countries, the pope looked at the issue of immigration on a global scale.

“Illegal immigration should be prevented, but it is also essential to combat vigorously the criminal activities which exploit illegal immigrants,” Pope John Paull II said during a message on World Migration day in 1995. “The Church considers the problem of illegal migrants from the standpoint of Christ, who died to gather together the dispersed children of God, to rehabilitate the marginalized and to bring close those who are distant; in order to integrate all within a communion that is not based on ethnic, cultural or social membership, but on the common justice.”

While his words were praised by human rights groups, many immigrants in the U.S. and Central America argued that the pontiff was not practicing what he preached.

In El Salvador and the Salvadoran community in the U.S., many lay people and clergy felt disenchanted with the Church and scoffed at Pope John Paul II’s clampdown on liberation theology – the political movement in Roman Catholicism that began in the 1960s and interprets Church teaching in relation to a freeing from unjust economic, political, or social conditions.

They also felt the Vatican ignored Salvadoran Archbishop Oscar Romero, who was eventually assassinated inside his church, when he pleaded for condemnation of the country’s death squads in the 1980s.

“There is not a big level of support for John Paul among the Salvadoran people because he effectively squashed liberation theology,” Chris Tirres, an assistant professor of religion at DePaul University, told Fox News Latino.

In his final years in the Vatican, Pope John Paull II was hit with a two-fold blow of declining health and the explosive sexual abuse scandal that rocked the Catholic Church, worrying some in the church that his image and legacy would be tarnished by problems that were ostensibly out of his control.

But many say Pope John Paul II should be judged mainly as an inspiring religious leader whose magnetism and powerful charisma drew many to the Catholic Church.

“Overall, he was someone who kept the faith at the heart of every matter and tried to reach those in the community who were in need,” said Father Juan Molina of the United State Conference of Catholic Bishops.