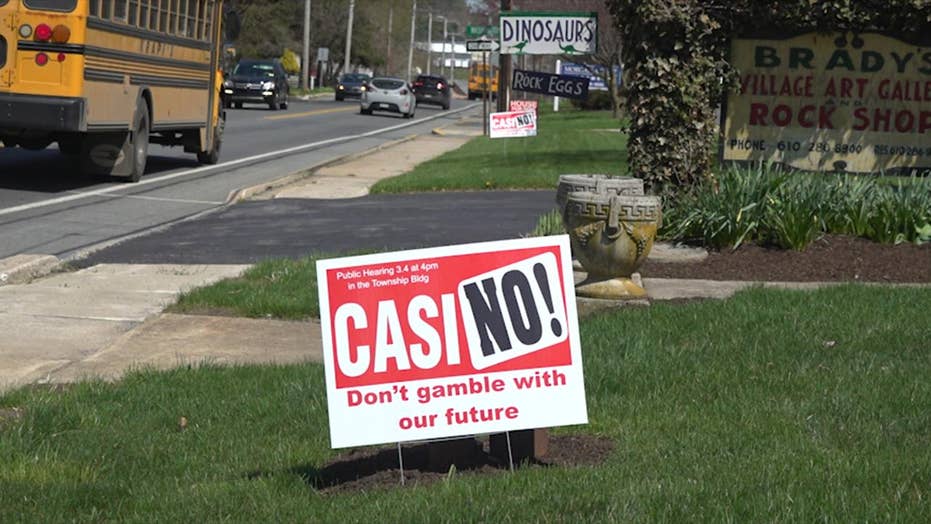 MORGANTOWN, Pa. -- For the past two years, Pennsylvania has quickly expanded its gaming laws to include Internet lotteries, sports betting, online gaming, and the approval of 10 satellite casino licenses, or “mini-casinos.”

More than 1,000 of Pennsylvania's 2,500 municipalities opted out of hosting, these mini-casinos, Caernarvon Township did not.

And, the region known as the gateway to Amish Country was selected by Penn National to host Hollywood Casino Morgantown, an 81,425-square-foot casino, featuring 750 slot machines, 30 table games, and an entertainment lounge.

A decision, Edward Kurtz, 86, whose Mennonite grandparents once owned and tilled the now 36 vacant acres where Penn National plans to build, says is troubling.

“Right about where my grandparents' house was they want to put a casino, so I’m upset and very sad for me and my community,” said Kurtz, a longtime resident, and former Mennonite Reverend.

Kurtz along with many community members in the religiously conservative area are opposed to the development. Red and white signs line many yards, and read, “Don’t gamble with our future,” residents’ polite way of saying “no” to a casino in their neighborhood.

Edward and Helen Kurtz pray over the land where the casino is projected to be built. (Fox News/Talia Kirkland)

An Amish elder, who wished to keep his identity private said he "doesn’t see any good coming from a casino,” which he regards as inherently dishonest.

“It’s the opposite of what this community is built on, hard work and honesty," he said.

The elder, who spent much of his 80-odd years working and living in the townships, fears that if a casino is built in town, many of his Amish brothers may relocate to more southern parts of the region.

Other Christian leaders in the community share many of the elder’s concerns of crime, sex trafficking, and predators that would be drawn to the casino.

“A casino has the potential to bring unwanted financial instability to community members, who may begin gambling,” said Rev. Coleen Painter, pastor of the Elverson United Methodist Church, which helped organize a petition that got more than 1,000 signatures opposing the casino.

“If they move forward with a casino these Christian folks will be at your door,” Painter jokingly said, “Preaching the good news to your clients and I think that great but you [Penn National] may not.”

Despite overwhelming opposition and a standing-room-only crowd at last month’s public hearing with Penn National, township leaders argue the casino project is a major boost to the town’s tax base.

Allen Styer, the chairman of the Caernarvon supervisors argues the casino will bring much-needed funds to the community. (Fox News/Talia Kirkland)

“The kind of stuff they were bringing up is crazy,” said Allen Styer III, the chairman of the Caernarvon Township Supervisors.

Styer says with the additional funding the township can finally add more emergency services, and fix roads in their community.

“Right now our entire budget is $2.6 million. The casino will contribute an additional $1.6 million. That's more than half, that’s’ a huge benefit to the community,” said Styer.

“It will be jobs that aren’t manufacturing jobs,” said Eagle.

In a statement, Jeff Morris, the Vice President of Penn National Gaming, Inc. stated: “We look forward to the opportunity to bring approximately 275 new construction jobs and 250 new permanent jobs to the area.”

“Frankly I don’t want to work a job where I could lose my life [referring to manufacturing jobs the region currently offers], nor am I qualified, but I can be trained to deal cards,” said Eagle.

Some local business owners have also come out in support like Donna Pollard who when asked what she thought of the potential casino said, “I saw potential in this community that’s why I invested here, so I am happy to see a big business validate those feeling.”

Penn National, a homegrown Wyomissing, Pa., company that began with a single Dauphin County racetrack and is now a publicly traded firm with 30,000 employees and 41 properties nationwide, has already paid a $7.5 million license fee to the state to locate a satellite casino in the area, which Styer and supporters view as a done deal.

But with the Gaming Control Board likely to vote on the licenses starting in May. Kurtz is hoping the social impact, and desires of his community are taken into consideration.

“All we can do is pray for our township."