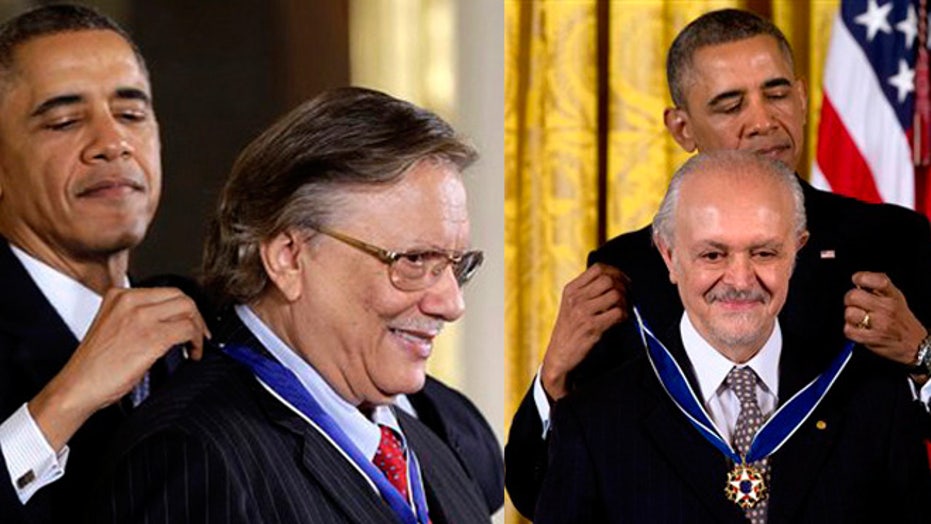 Born into poverty and held back by the Fidel Castro’s communist regime, the trumpeter, pianist and composer defected to the United States in 1990 with the help of his friend and mentor Dizzy Gillespie.

Now he is among the 16 Medal of Freedom recipients honored by the President Obama in 2013.

"As a young man in Cuba, Arturo Sandoval loved jazz so much it landed him in jail," said President Obama during a ceremony Wednesday at the White House. "It was the Cold War and the only radio station where he could enjoy jazz was 'Voice of America' and it was dangerous to listen to, but Arturo listened anyway."

With Sandoval, who is 64, was honored Mexican chemist and Nobel Prize winner Dr. Mario Molina and 14 others, including former President Bill Clinton, TV personality Oprah Winfrey, late astronaut Sally Ride, among others.

“This is one of my favorite events every year,” Obama said. “This year it’s just a little more special, because this marks the 50th anniversary of President (John F.) Kennedy establishing this award.”

Known for his Afro-Cuban jazz, Sandoval has won nine Grammys, one Emmy and six Billboard Awards.

Molina, 70, who came to the U.S. to pursue a graduate degree, has dedicated his career to climate change and is credited with discovering the Antarctic ozone hole.

"Dr. Mario Molina's love of science began as a boy in Mexico City in a homemade laboratory in a bathroom at home," Obama said. "That passion for discovery led Mario to become one of the most respected chemists of his era."

Molina is a professor at the University of California, San Diego, director of the Mario Molina Center for Energy and Environment, and a member of the President’s Council of Advisers on Science and Technology.

The Presidential Medal of Freedom is the country’s highest civilian honor given to those who are leaders in their chosen field.

“The Presidential Medal of Freedom goes to men and women who have dedicated their own lives to enriching ours,” Obama said. “This year’s honorees have been blessed with extraordinary talent, but what sets them apart is their gift for sharing that talent with the world.”

The ceremony at the White House opened a day of tributes to former President Kennedy, who established the modern version of the medal. He was assassinated 50 years ago this week as the first award ceremony neared.

Sandoval will perform for all honorees, the President and First Lady Michelle Obama at a dinner to be held at the Smithsonian National Museum of American History on Wednesday evening. He is also performing at the National Christmas Tree lightning ceremony at the Ellipse, near the White House, on December 6.