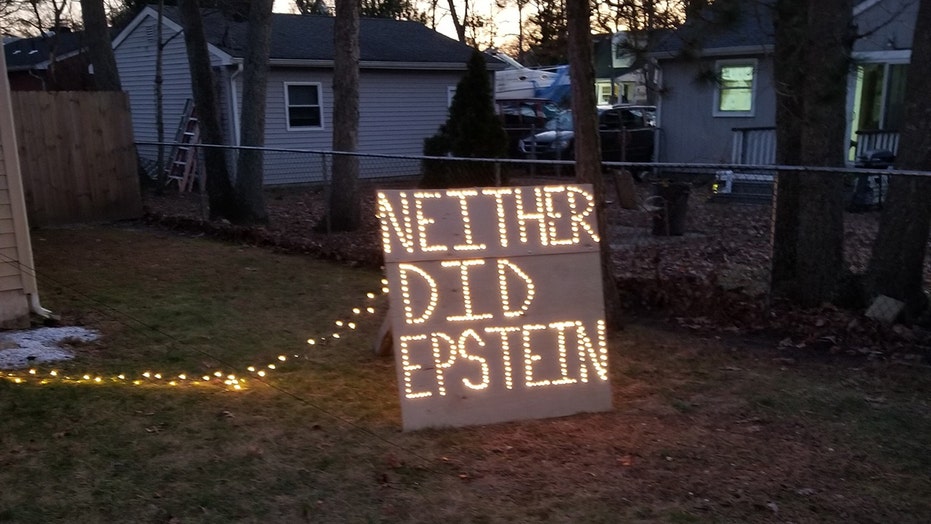 Not even Christmas is safe from conspiracy theory memes.

Most people use their Christmas decorations to wish their neighbors a happy holiday or send well wishes. One N.J. man, however, decided to say something different with his lights.

N.J. resident Kevin Gibson Jr placed two signs on his yard, one that says, "These lights didn't hang themselves," and another that reads, "Neither did Epstein." (Kevin Gibson Jr.)

Kevin Gibson Jr shared photos of his Christmas lights on Facebook with the caption, “My lights were boring me so I added a little razzle dazzle.” The lights on the roof of his house spell out a slang term for America.

In his yard, there are also two signs adorned with lights. One says, “These lights didn’t hang themselves.” The other adds, “Neither did Epstein.”

The decorations are referencing a social media meme that rose to prominence after the death of Jeffrey Epstein, who was found dead in his cell at a jail in New York on August 10 of an apparent suicide. Based on the nature of Epstein’s crimes, his wealth and supposed connections, many people on the Internet have shown extreme skepticism of the official story.

Gibson based his display off of the popular "Epstein didn't kill himself" meme. (Kevin Gibson Jr)

Since then, many conspiracy theorists shared images or memes of an everyday occurrence, with a variation of the phrase, “Epstein didn’t kill himself” added to the bottom.

This inspired Gibson’s Christmas display, NJ 101.5 reports. The outlet spoke with the N.J. resident, who explained, “For the last 3 years I started the big MERICA on the roof and also try to use the FB meme of the year as an add on. I started it with the ‘Harambe the gorilla’ meme three years ago. Just something I found funny that Lacey Township started to take notice to in all honesty.”