Wedding bells have rung at last for Meghan Markle and Prince Harry, and the royal bride stepped out in Clare Waight Keller for Givenchy for the big day.

Meghan Markle leaves the Cliveden House Hotel, accompanied by her mother, Ms Doria Ragland, ahead of her wedding to Prince Harry at St George's Chapel at Windsor Castle in Windsor, Britain, May 19, 2018. (Reuters)

Meghan Markle and her bridal party arrive at St George's Chapel at Windsor Castle for her wedding to Prince Harry in Windsor, Britain, May 19, 2018. (Reuters)

The headpiece, made in 1932 with a floral center brooch dating back to 1893, has not been worn in decades and was lent to her by Queen Elizabeth II.

HOW MEGHAN MARKLE’S WEDDING DRESS WILL IMPACT THE GOWN INDUSTRY

Keller, the first female artistic director of the storied French fashion house favored by Audrey Hepburn, worked closely with the bride on the design of the dress after meeting earlier this year, Kensington Palace tweeted on May 19. Markle was also adamant about honoring her new homeland on the big day.

“Ms. Markle expressed the wish of having all 53 countries of the Commonwealth with her on her journey through the ceremony. Ms. Waight Keller designed a veil representing the distinctive flora of each Commonwealth country united in one spectacular floral composition,” they said.

Kensington Palace further confirmed in a press release obtained by Fox News that Markle requested Wintersweetwhich and California Poppy flowers be embroidered into the veil, in a nod to the native blooms of her English residence at Nottingham Cottage and home state of California.

The 36-year-old's hair was styled by Serge Normant in a low chignon with a middle part and face framing tendrils. Her makeup was done by longtime friend Daniel Martin. Markle accessorized with diamond stud earrings and a matching bracelet by Cartier to complete the look. She wore white satin heels by Givenchy.

The royal wedding is set to be one of the biggest events of the year. (Reuters)

The newlyweds met on a blind date in July 2016 and have been together ever since. (Reuters)

"The open neck frames her face beautifully – and the long sleeved, simplicity – it’s just so her."

For Markle’s bridal bouquet, Prince Harry handpicked “several flowers” from the couple’s private garden the day before the wedding in a poignant tribute to his late mother.

"The spring blooms include Forget-Me-Nots which were Diana, Princess of Wales’ favorite flower. The couple specifically chose them to be included in Ms. Markle’s bouquet to honor the memory of the late Princess on this special day,” Kensington Palace said in a statement.

As per British royal tradition, myrtle, symbolizing hope and love, is also included in the arrangement.

Prince Harry opted for a black military uniform for the big day. (Reuters)

Keller said it was "truly an honor" to produce the highly anticipated gown and "be part of this historical chapter," The Sun reports.

"It has been an immensely rewarding experience to get to know Meghan on a personal level, one I will forever carry with me. The House of Givenchy joins me in wishing her and Prince Harry every wish of happiness in their future," she said.

The groom sported his black Blues and Royals military uniform, with his older brother and best man, Prince William, following suit. For special occasions like weddings, it is traditional for members of the British monarchy to sport ceremonial uniforms, Entertainment Tonight reports.

After the royal bride walked down the aisle before 600 guests at St. George’s chapel at Windsor Castle, Prince Harry intimately helped his bride remove her veil.

When Markle arrived at the altar, the 33-year-old prince said "You look amazing, I missed you." 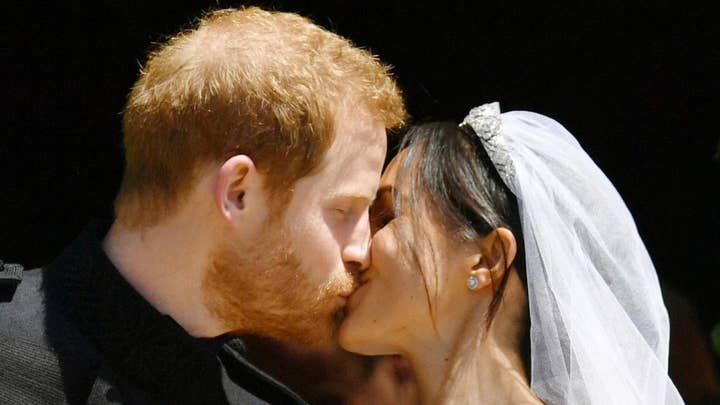 For her part, the royal bride once mused that her dream wedding gown would be elegant and timeless.

“Classic and simple is the name of the game, perhaps with a modern twist. I personally prefer wedding dresses that are whimsical or subtly romantic,” Markle once told Glamour.

Kensington Palace revealed early this morning that the newlyweds will now officially be known as the Duke and Duchess of Sussex.