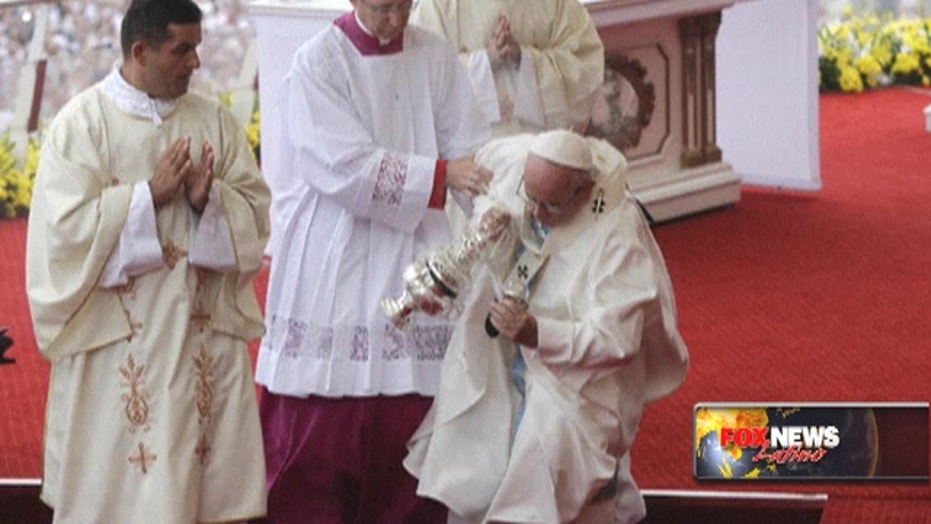 Pope Francis missed a step and fell to the ground in Poland.

CZESTOCHOWA, Poland (AP) – Pope Francis missed a step and fell to the ground Thursday as he walked on an open-air platform to celebrate Mass at Poland's holiest shrine of Jasna Gora.

In a dramatic moment, the 79-year-old Francis, walking in his long robe with an incense holder in his hand, did not notice a step down from the platform and fell to the ground before the altar. Francis braced his fall with his left hand and priests around him rushed to help, with Mons. Guido Marini, an aide, helping him back to his feet.

The Mass proceeded as planned and the pope delivered a long homily before tens of thousands of faithful gathered at the foot of the Jasna Gora monastery in Poland's southern city of Czestochowa.

Asked if Francis had suffered any ill effects from the fall, a Vatican spokesman, Greg Burke, said "the pope is fine."

Czestochowa Archbishop Waclaw Depo said Francis fell because he had closed his eyes and appeared to miss a step.

"He is in good condition. He did not even complain at all. He never said a word," Depo said. "Also the homily showed that the pope has strength and this strength he gets from the people."

Francis enjoys relatively good health, despite putting in long days of ceremonies, audiences and meetings. In his youth, he had a section of one lung removed, and on occasion he has sounded somewhat winded.

A few times in the past, Francis has missed a step or even fallen on stairs. Each time he has gotten up on his own or thanks to an aide lending a hand, then carried on without missing a beat for the rest of the long ceremonies.