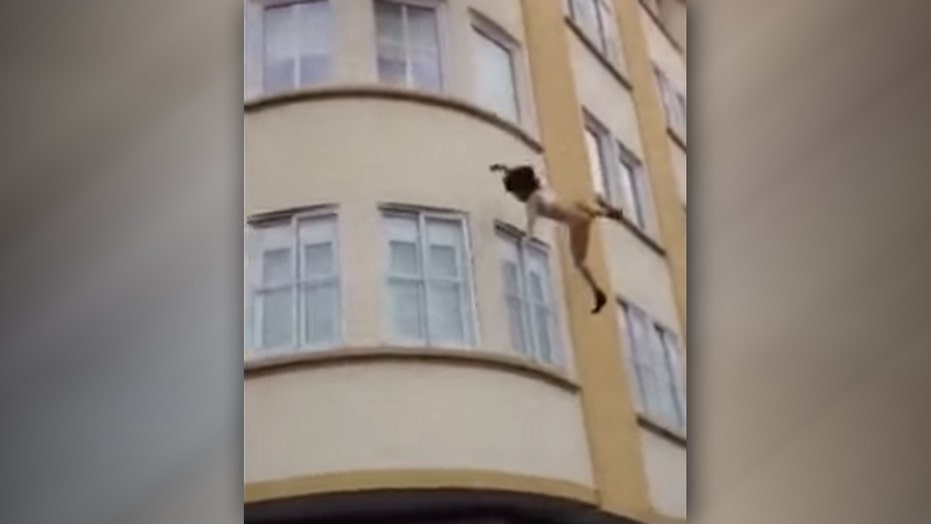 Raw video: Fast-thinking onlookers break the woman's fall as she tumbles down side of apartment building in Cedeira, Spain

Fast-thinking, fully-clothed onlookers came to the rescue of a half-naked woman climbing on the side of a building in northwestern Spain.

The 47-year-old woman, whose name has not been released, was attempting to escape from her apartment building in Cedeira, Spain, which was on fire. She went out onto the ledge to escape the smoke and flames, and in her hurry, she was unable to get fully clothed.

According to the New York Post, the woman’s husband had just left the apartment to walk the couple’s dogs. When he returned he alerted good Samaritans standing nearby to hold the blankets in an attempt to break her fall.

In the video, you can see the woman begin to slip and fall. She bounces off the building’s exterior, then lands with a thud, her fall at least broken by the stretched-out blankets below.

Fireman at the scene confirmed that the woman had no choice but to attempt escape via the window, as the smoke was too thick to breathe.

The woman was taken to a nearby hospital and released later in the day with minor bumps and bruises.

According to authorities, the fire was sparked by a malfunction in the fuse box.

The mayor of Cedeira, Pablo Moredo, publicly thanked the community and emergency service persons for saving the woman's life.

He added, “If possible, it would be great to block the door with wet blankets or something similar in order to avoid the smoke. This should allow emergency services to have the time to carry out a rescue.”