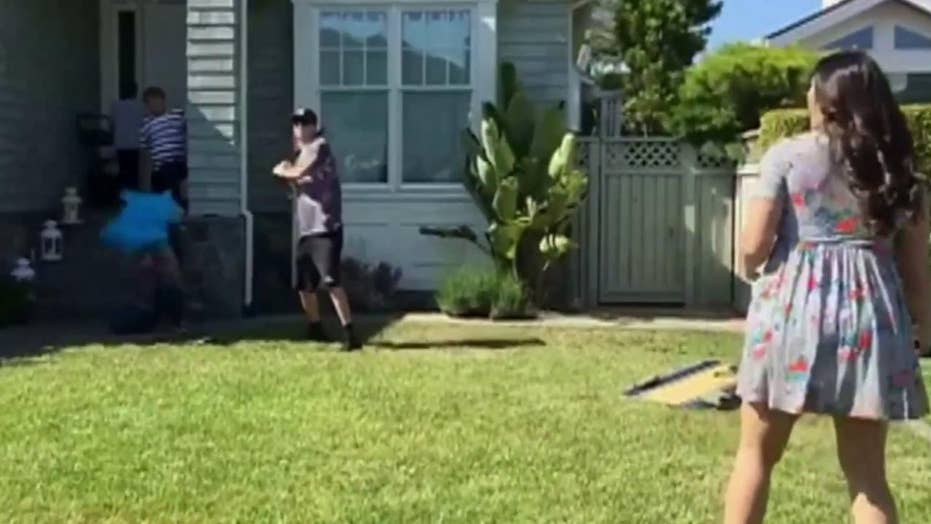 A couple decided to reveal the gender of their baby through a powder filled baseball. Unfortunately for the grandfather-to-be, the mom’s pitch was not in the strike zone.

Blue powder and laughter exploded simultaneously for one California family, whose baseball-themed gender reveal went wrong when the batter struck out and the grandfather-to-be was smacked in the face with a ball.

Brittany and Max McCauley had planned a gender reveal party for their first child, due in October, on the same day as the future father’s 27th birthday party.

“We wanted to do something a little special to tell everyone at the same time. We didn’t know the gender ourselves, so it was a surprise for everyone,” Brittany told People. As her husband is a baseball player and “die-hard” San Francisco Giants fan, Brittany and her husband arranged to learn the sex of their first baby with a powder-filled baseball.

However, hings didn’t unfold quite as planned.

With all eyes on the couple, Brittany’s pitch to Max sailed over his bat and smacked his father, Scott McCauley, in the forehead.

“The moment was just so quick and overwhelming,” Brittany said of the accidental injury, which left Scott bleeding with a cut on his forehead. “I felt terrible for hitting him!”

Shared by friend Clarice Guido to Twitter, the clip soon went viral and has since been viewed nearly 580,000 times. Naturally, commentators had a lot to say about the sweet and hilarious scene.

“This is the best thing I’ve ever seen,” one fan applauded.

“You simply cannot take a ball in that situation,” another agreed.

“To be fair, the pitch was a bit high,” ESPN’s SportsCenter said.

Meanwhile, others shared videos of their other, more successful, baseball-themed gender reveals.

In the wake of the funny scene, Max has described his wife’s pitch as “unhittable,” but she disagrees.

“I think he’s been conditioned as a little kid to never swing at the first pitch, but you clearly can’t do that with a gender reveal baseball!” Brittany laughed.