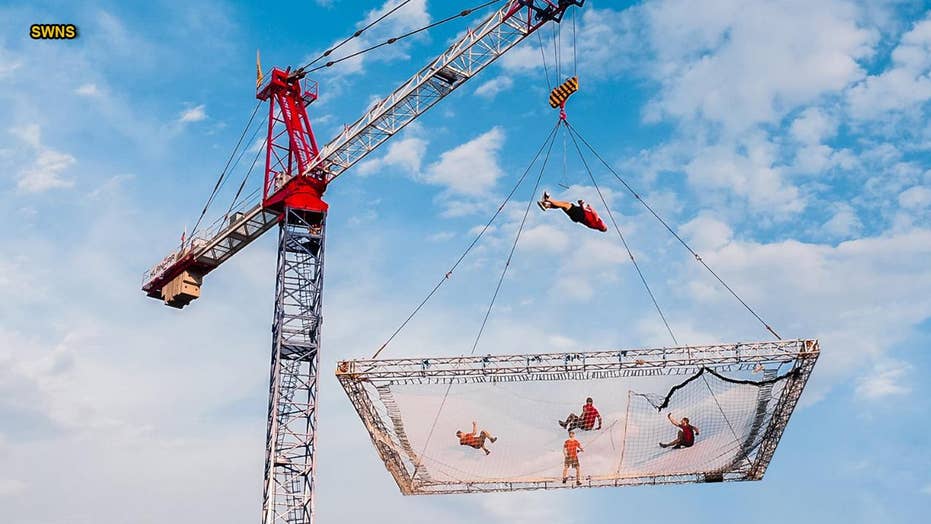 A stunt crew called the 'Dunking Devils Squad' have built what they claim is the 'world's largest trampoline' and, to top it all off, suspended it about 100 feet above the earth. Measuring over 1500 square feet, the trampoline was built over the course of two days, utilizing 300 springs and 250 square meters (2,638 square feet) of netting.

Kinda puts your backyard trampoline to shame, doesn’t it?

A group of thrill-seekers from Slovenia calling themselves the “Dunking Devils Squad,” or “DD Squad,” for short, claim to have built what they claim to be the “world’s largest trampoline” — measuring over 1,500 square feet — in Sežana, Slovenia.

To top it off, they even suspended the entire apparatus about 100 feet above the earth before climbing aboard to perform their dizzying stunts.

A group of <a data-cke-saved-href="https://www.foxnews.com/world/daredevil-in-london-scales-the-shard-one-of-europes-tallest-buildings" href="https://www.foxnews.com/world/daredevil-in-london-scales-the-shard-one-of-europes-tallest-buildings" target="_blank">thrill-seekers</a> from Slovenia calling themselves the “Dunking Devils Squad” claim to have built the “world’s largest trampoline” measuring over 1500 square feet — and then they suspended it from a crane. (SWNS/DD Squad)

“The feeling of floating 40 meters (131 feet) above ground protected merely by a thin web is, frankly, indescribable,” he added.

The crew built their trampoline over the course of two days, utilizing 300 springs and 250 square meters (about 2,638 square feet) of netting. Domen Rozman, another member of the squad, credited the careful “planning and preparation” of the crew for the successful project, which, in turn, allowed them to achieve their incredible stunts.

“The guys had to trust each other 100 percent as there was no room for mistakes,” he said. “It was pure joy watching acrobats flying more than 32 feet high in the air.

"I am certain that this video featuring our extreme stunts will go viral and reach viewers across the globe,” he added.

"I am certain that this video featuring our extreme stunts will go viral and reach viewers across the globe,” one of the members claimed. (SWNS/DD Squad)

Judging by the reaction of followers, the DD Squad is on the right track.

“This is insane,” one commenter wrote.

“You guys are legends,” another claimed.

In addition to their gravity-defying trampoline stunts, the DD Squad has also shared videos of themselves cliff-diving, flipping over cars, jumping on trampolines attached to moving vehicles and doing flips off of a Russian swing.

The quartet doesn’t just perform the stunts, either. They claim to build their own apparatuses, too.

“We’re not merely adrenaline addicts,” reads a short bio on their YouTube page. “We’re engineers who design and build our own acrobatic equipment on which we perform crazy daredevil stunts that have never been done before.”

Although the trampoline featured in the group's latest video has since been disassembled, Rozman tells Fox News that the DD Squad is planning on setting it up again in the summer of 2020 for an "extreme trampoline" event they're planning in Slovenia's capital of Ljubljana.