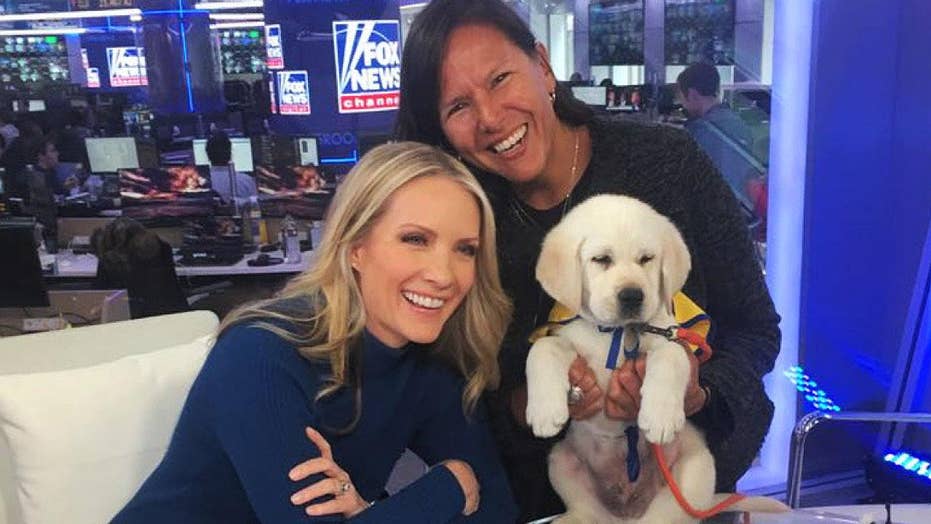 The Daily Spike: A look back at Spike's journey

Spike, a service dog in-training, has made great strides -- and taken part in some great adventures -- during his journey to becoming a Canine Companion.

Spike and I had a big night out at the Canine Companions for Independence Hearts and Heroes gala. Dana Perino graciously agreed to be the Honorary Chair of the event and brought her teams from The Daily Briefing and The Five.

There were so many puppies and dogs there. Photographer Elias Weiss Friedman of “The Dogist” was there too, along with Andrea McCarren, a former news reporter for WUSA out of Washington DC, and current puppy raiser of Canine Companion “Maverick.”

Each year, someone who has done extraordinary work for Canine Companions is honored. This years’ honoree was James Schenck, the President and CEO of PenFed Credit Union. James is also a veteran, a West Point graduate, former Black Hawk Pilot, and was the Special Assistant to the Secretary of the Army.

Under his leadership, PenFed not only commits their financial resources to help veterans, but they also sponsor the raising of Canine Companions for Independence puppies by their employees. Three dogs in Washington DC - Clint, Admiral and Maverick - are being raised by PenFed employees with a fourth joining this summer.

Pentagon Federal Credit Union teams with Canine Companions for Independence to help give back.

PenFed has donated well over $100,000 to Canine Companions and is covering all costs associated with raising these dogs. James’ goal is to have every single PenFed Financial Center in the country raising a puppy for Canine Companions.

The most inspiring moment of the evening was hearing from Ken Hernandez, a US Air Force Veteran and retired Port Authority Police Officer. Ken lost the use of his legs five years ago and talked about the journey this has been for himself and his family.

“I waited so long for that phone call from Canine Companions for Independence—so long to hear them say it was my turn—and now that I have Miller by my side, I can honestly say it was so worth the wait,” he said in his speech, referring to his service dog, Miller.

Ken described his upbringing in Brooklyn, and said once 9/11 happened, he discovered his true calling: service.

“I joined the Air Force and specialized in civil engineering for six years. As a senior Airman, I worked alongside some of the bravest, most generous men and women I’ve ever met. My time in the Air Force made it clear that I was happiest when I was helping others.”

“Then in 2014, my entire world was flipped upside down,” he continued. “I was involved in a motor vehicle accident and sustained a spinal cord injury that left me paralyzed.”

“I can’t possibly explain the emotions you go through when life throws you this type of curveball. With my incredible wife and two beautiful children by my side, we fought through the grief and decided to embrace our new destiny.”

Then in 2016, Ken got involved with the Wheelchair Games, where he met a man with a service dog.

“We got talking, he let me walk his dog and that was it—I was on a new mission. The man helped me apply for my own service dog that very day,” Ken said.

Ken received the call in November from Canine Companions for Independence that they were ready to match him with a service dog.

“Now I may be biased... but Miller is truly special,” Ken said.

“Miller is a doer. He wakes up every morning and looks at me like, ‘Come on. Let’s go. Let’s do something.’ After years of being home alone all day while the kids were at school and my wife was at work, I’ve needed someone to push me and motivate me. Miller is that someone. You can’t imagine what something as simple as a game of fetch in the backyard does for me. It’s a game changer for my entire outlook on life,” he shared.

“Miller can open drawers, turn on lights, open and close doors, pick up a pen, nudge my legs onto the bed, help me get dressed, bring me my sneakers, reach things on high shelves in the store, get my phone, carry bags. I mean, he does it all. And he does it all happily,” he continued, noting that he’s gained his confidence back since getting Miller.

“Since Miller has come into my life, everyone has seen the change. I’m just happier again. I’m not scared to go out. I’m confident. Instead of feeling lonely and worried at home, I feel like someone’s got my back,” he said in his speech.

“I know somewhere out there is a little girl or boy or a father or mother or someone… just waiting for that call. Waiting for their very own Miller. And to them I say: ‘hang in there.’”