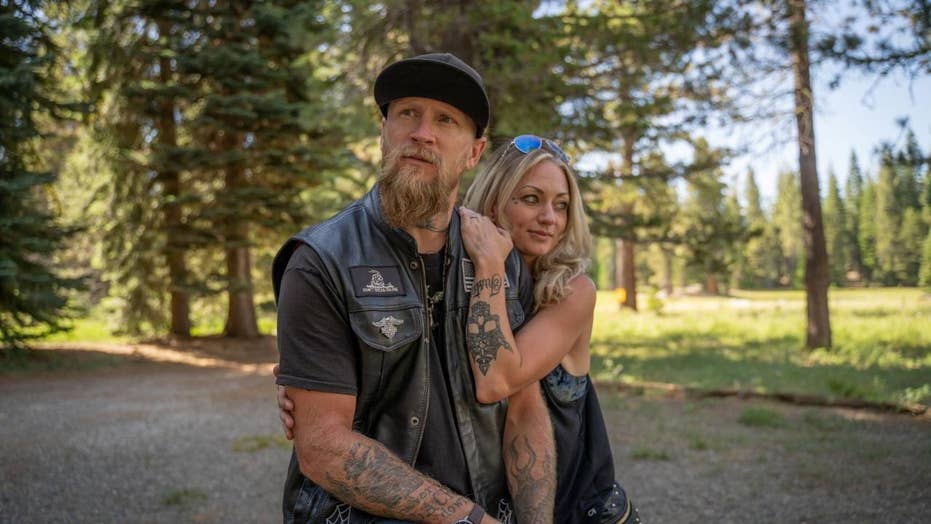 Crashing into a deer didn’t stop this California biker couple from their biker-themed wedding. Cast and all the couple vowed to be each others ‘ride or die’

A bride and groom vowed to be each other’s “ride or die” in a biker-themed wedding just weeks after they totaled their Harley Davidson in a horror crash.

Justin Reid, 36, and Victoria Hemenes, 31, recently collided with a deer in a terrifying accident three weeks before they planned on riding a motorbike up the aisle. The crash left Reid with a dislocated elbow and in need of a painful skin graft, while Hemenes suffered whiplash, a concussion and needed eight stitches in her knee.

Despite their injuries, the couple was determined to tie the knot on time.

Justin Reid, 36, and Victoria Hemenes, 31, recently collided with a deer in a terrifying accident three weeks before they planned on riding a motorbike up the aisle. The crash left Reid with a dislocated elbow and in need of a painful skin graft, while Hemenes suffered whiplash, a concussion and needed eight stitches in her knee. (SWNS)

The groom, from, South Lake Tahoe, Calif. said: “Even if we had to be carried down the aisle on gurneys, we were going to have our wedding.”

The newlyweds, who run a property maintenance company together, insisted on keeping their big day biker-themed even though they counted themselves lucky to be alive after the gruesome crash.

Motorcycle enthusiast Reid popped the question in October 2018 and the pair began planning their biker-themed wedding.

The couple on the day of the accident. (SWNS)

“Victoria had been into bikes before but I have been a bike enthusiast for quite a few years now. When we decided to get married, I knew I wanted a biker-themed wedding,” Reid said.

“We didn’t want a normal wedding. We wanted a weekend-long festival,” the groom continued. “The original idea was to have my motorcycle parked in the aisle and have the groomsmen and bridesmaids ride their bikes up to us.”

Three weeks before their big day, on July 27, the couple and a group of friends rode to the camping ground they had hired for their big day in Silver Fork Ranch, Kyburz, Calif.

Reid said: “It was an awesome day. A bunch of our friends got together and we decided to go out to the wedding venue. It’s an hour away through the mountains.”

Afterwards the group rode home on a scenic route across Immigrant Trail to Route 88.

"Even if we had to be carried down the aisle on gurneys, we were going to have our wedding," the groom said.  (SWNS)

“It was a beautiful ride and there was an awesome sunset,” he added.

As the engaged couple rounded a bend into Hope Valley at around 60mph, they found themselves riding head-on into a deer.

“All of a sudden this deer was in our headlights,” Reid recalled. “I was trying to dodge around it but I didn’t have enough time. I turned into the middle of the deer, put my head down and went for it.”

“The second we hit the deer, my helmet hit the back of Justin’s helmet and knocked me out,” Hemenes said.

Reid was conscious as the couple veered into the woodland on the edge of the road.

The bride and groom in the hospital following their serious motorcycle crash. (SWNS)

“I remember seeing the deer explode and we went through the carcass,” he described. “For a couple of seconds I looked around and I thought, ‘we made it’.”

But the impact with the deer had ruined the breaks and counter steering of the Harley Davidson.

“I was steering to the right and I couldn’t do anything about it. We were heading into the forest,” Reid said. “We hit one of the reflective markers on the side of the road and it cut my left arm open and sliced Victoria’s knee.”

“We fell off and the bike flipped over,” he went on. “I remember tumbling and seeing dirt and rocks and sky and I just thought: ‘I hope the bike doesn’t land on me’.

“I flipped myself over one more time and I saw Tori already running to me and screaming: ‘We’re alive!’. I was still laying there,” the groom continued. “I moved my head back and forth and my fingers and toes and bent my leg. But when I tried to push myself up, my left elbow just flopped out. There was a huge chunk of my flesh missing on the inside of my elbow.”

An ambulance took the couple to Barton Memorial Hospital in South Lake Tahoe.

Reid’s forearm bone had separated from his elbow. Doctors operated that night and inserted a pin into his joint.

The next day, they grafted skin from his thigh to his left arm, leaving pieces of his leg tattoo on his arm.

“When we decided to get married, I knew I wanted a biker-themed wedding," the groom said.  (SWNS)

The bride required eight stitches to her knee and suffered lacerations to her arm.

“For the first couple of days neither of us could walk. We were both in wheelchairs being pushed around by our friends,” she said. “I was trying to heal and we weren’t able to be together which was agony,” Hemenes detailed.

But the couple didn’t even consider postponing their big day.

“We had so much support. Everyone around us helped make our wedding happen,” she said. “We had to rent a massive U-Haul truck to get all our stuff over to our wedding venue. Our friends helped us pack everything up.”

On August 17, the couple tied the knot, walking up the aisle with no assistance, with Reid sporting a large plaster cast on his arm.

The couple made sure to keep their biker-themed wedding with the groomsmen and bridesmaids riding up the aisle on motorcycles.

The newlyweds are enjoying married life and hope that Reid, who still has a wound vacuum attached to his arm, will soon be ready to climb back on to a bike. (SWNS)

The cake featured a nod to the couple’s lucky escape with figurines of a couple with a bike and a deer cut in half.

Three workers from motorcycle shop Battle Born Harley-Davidson arrived at the wedding after hearing about the crash from the groom’s childhood friend Nick Parkhurst. They gave the bride and groom new full-face helmets and padded jackets.

“They hung out and stayed for the wedding - it was a meaningful moment,” Reid explained.

The newlyweds are enjoying married life and hope that Reid, who still has a wound vacuum attached to his arm, will soon be ready to climb back on to a bike.

He plans to buy back the totaled Harley Davidson bike from his insurer and rebuild it himself.

“I can’t stop looking at motorcycles. As soon as I can bend my elbow again, we’ll be on a bike,” he claimed.

“He’s the only person who can scare me and make me feel safe at the same time,” Hemenes said. “When we’re riding together, it feels intimate.

“We will be back on that bike, there’s no other bike that’s quite the same,” she elaborated. “Our intention was to take a load of wedding pics with the bike but Justin will not take any pictures with a bike that is not his bike.”

“So we’ll reenact our wedding pictures once he’s rebuilt the bike,” the bride shared.