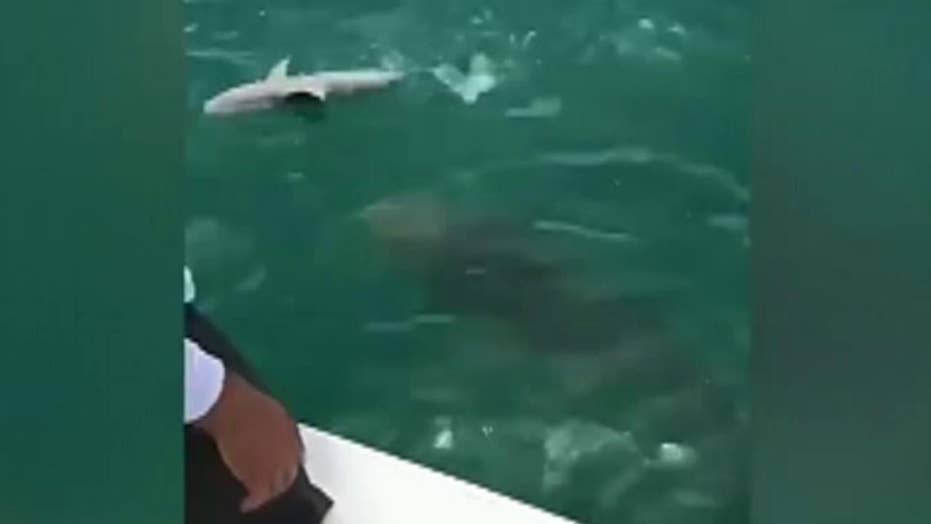 There's a reason goliath groupers are called the garbage disposals of the sea — they eat everything in sight, including sharks apparently.

A group of fishermen were able to witness a 500-pound grouper's "rare" meal during a fishing trip off the coast of Everglades City, Fla., last week.

Captain Jimmy Wheeler with Everglades Fishing Company watched as someone in his group caught a 3-foot shark. As the fisherman started reeling the creature in, a large shadow appeared. Wheeler instantly knew what was going to happen next.

"Watch this. You guys are going to freak out," Wheeler warned.

"He just sucked it in. I don't remember ever seeing anything this crazy."

Suddenly, an open-mouthed giant goliath grouper swam up and gulped the 3-foot-long shark down.

"He just sucked it in," Michelle told Fox News, clarifying that she didn't witness the scene in person. "I don't remember ever seeing anything this crazy."

The fishermen wrestled with the large fish for a few minutes until the line finally loosened and the goliath grouper spit out the shark, which the fishermen planned to catch and release.

"That same grouper later swallowed a stingray — or manta ray," Michelle recalled her husband telling her. "[Goliath groupers] have become a nuisance, according to a lot of fishermen. They're eating everything."

Goliath groupers have been protected in the state of Florida since 1990 due to declining populations. They must be immediately returned to the ocean (unharmed) if they are accidentally caught on a fishing line.

"If a large goliath is brought onboard a vessel or out of the water, it is likely to sustain some form of internal injury and therefore be considered harvested."

Formerly known as a "jewfish," goliath groupers can grow up to 8 feet long and weigh about 800 pounds. They are typically identified by their large mouths and dark striped bodies.

"We snorkel and see they'll just go by a fish and suck it in. They're huge. They didn't get that way from not eating," Michelle joked.